Courage the Cowardly Dog: The Nutcracker (2002) 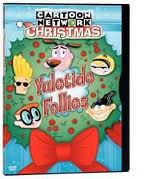 I have fond memories of Courage the Cowardly Dog. The show handled tone extremely well, delivering a surreal mix of horror and comedy. I haven't seen much in years, but I remember being really impressed with some of the episodes.

While this wasn't one of the best episodes, it was entertaining. The premise was particularly strong: Courage and his family were "shopping" at the dump, when they got locked in. Courage winds up with an antique nutcracker, and they're besieged by ROUSes out to make a meal of Eustace and Muriel.

The entire thing quickly devolves into a tribute to Tchaikovsky's ballet (fortunately, the rats are excellent dancers). It's quirky and interesting, and it maintains the series' dark style and disturbing designs. It's only a half-episode, so it ends before the gag gets too old.

We found this on a Cartoon Network Christmas Yuletide Follies DVD Lindsay found at the library. I'm not sure whether this was originally intended as a Christmas episode or if they were just playing off the Nutcracker. I didn't notice any other Christmas elements, which suggests the latter. On the other hand, The Nutcracker's synonymous enough with the holiday that Cartoon Network decided it belonged on the DVD, so I'm discussing it here under the same logic.
00's Comedy Episode Erin Snyder Horror