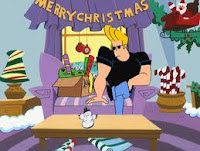 Anyway, only about half the cartoons on it are actually Christmas related; the rest are tangentially related at best. This one's a full half hour (well, American TV half hour, which translates to about 22 minutes), and it's certainly Christmas themed.

Of my thirty-two years on this planet, I subscribed to cable TV for exactly one, and that was the year of 2002-2003, my first year out of college. During that time I watched almost exclusively Cartoon Network. When Johnny Bravo came on, I generally lost interest. It wasn't that the show was bad; it just didn't grab my attention the way Powerpuff Girls, Dexter's Laboratory, or Courage the Cowardly Dog did. However, when I actually did sit through a few episodes, I remember liking them quite a bit.

This one blew those all away, though. It was kind of awesome.

The premise was an old one: Johnny forgot to mail his letters to Santa and now has one day to try and get them to the fat man. While there's nothing new about the plot, the jokes are hilarious. Not to mention subversive: Suzy's explanation for the meaning of Christmas, the birth of Jesus, and the significance of gifts gets delivered in one breath, summing up how absurd this holiday really is so subtly that I doubt anyone took offense (but perhaps they should have).

I've had a lot of luck with Cartoon Network Christmas specials and episodes, and this is no exception. If you're flipping through the channels this holiday and stumble across this, I highly recommend it. It's not one of the best specials out there, but damned if it isn't funny.
00's Comedy Episode Erin Snyder Fantasy Highly Recommended