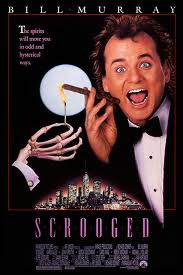 I see this movie about once every five years, enjoy it quite a bit, then promptly forget every joke in the film. This isn't necessarily a bad thing - in a way, the fact that Scrooged is so forgettable gives it re-watch value it wouldn't otherwise have - but it also puts a limitation on the film's impact.

Scrooged attempts to ride a line between tones and genres and pulls it off well enough to be entertaining, but not so well as to leave a lasting impression. The movie's concept is ambitious: a cold-hearted network executive in the middle of producing a live televised production of Scrooge is visited by the three legendary ghosts of the story. There was a lot of potential here to build a sense of vertigo by playing off the inherent surreality of the situation. Unfortunately, the movie didn't fully embrace this. At no point did the main character reflect on the similarities between his experiences and Scrooge's: he seems completely unaware he's living A Christmas Carol, despite clearly being familiar with the story.

The movie wants to be more than it is, and thanks to Bill Murray, you root for it to succeed. But in the end, it's a tad too timid to be truly subversive and lacks the heart to deserve being dubbed a classic. The film moves along and makes you laugh, but there's no emotional connection established. Likewise, the ending toys with the concept that the main character's redemption takes the form of a mental breakdown, but it doesn't follow through. With the addition of some consequences, that could have struck a nerve, but as it is the movie concludes with the same generic "happily-ever-after" every other Christmas movie offers.

This is still a good movie, and if it's been a while since you saw it, it's worth checking out. But lacking the heart of Elf or the darkness of Bad Santa, Scrooged feels a bit outdated. This is worth seeing once every five years for a laugh, but no more than that. It's a solid flick, but a long way from being a classic.