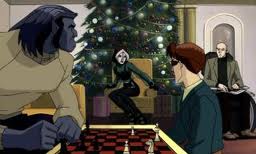 X-Men: Evolution is a strange show. It started out with one of the worst premises imaginable: having the X-Men and the Brotherhood of Evil Mutants as students with secret powers enrolled in the same public high school. And, frankly, it didn't even do that premise justice for more than a year.

However, over the seasons, the show evolved into something else. Somehow, the characters and the setting evolved until it actually made sense calling them the X-Men. In a sense, most of the series wound up functioning as an extended and in-depth origin story, which is sort of cool.

Unfortunately, there are a lot of bad episodes to sit through before the series picks up.

This episode is after the worst of them, but it's still got a lot wrong with it. As the title implies, On Angel's Wings focuses on Angel, who inexplicably hides his powers in shame, despite the fact his mutation is more likely to get him laid then hunted (to be fair, this bizarre bit of illogic is lifted right from the comic). Cyclops heads to New York to find him, assisted by Rogue, who's clearly smitten with Scott Summers. Not that she could touch him, given her powers, to say nothing of the puritanical network standards.

Magneto shows up to try and enlist Angel, who believes the megalomaniac dressed in demonic gear, because everyone believes Magneto at first in this show. Of course, Magneto quickly starts acting evil, and before long Angel's formed an alliance with the X-Men.

There's a subplot about Angel playing hero and saving people, using his incredible powers, which really aren't all that incredible, given what most of the X-Men are capable of. In fact, why is Magneto even bothering with this guy? Last season he made a big deal about only wanting the most powerful mutants on his side, now he's risking his life to recruit some schmuck with the proportionate strength, speed, and agility of a dove.

So. This wasn't awful, but you can leave it off your annual list. If you're dying for some X-Men in your X-Mas, skip this and watch "Have Yourself a Morlock Little X-mas" instead. It's not that the '95 Christmas episode was actually better, but it's far more interesting, in a twisted, screwed-up sort of way.

If you must, X-Men Evolution is streaming on Netflix.
00's Action Episode Erin Snyder Superhero