For Better or For Worse: The Bestest Present (1985) 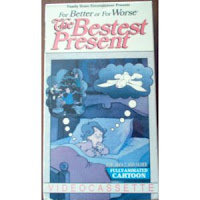 You know how you've never heard of the 1985 For Better or For Worse Christmas special? Yeah, there's a reason for that.

Now, first I want to make a couple quick disclaimers. I've never followed the comic strip this is based on, and don't know any more about it beyond what I've gleamed over the years from news reports and skimming the Wikipedia article. From what I can tell, the comic incorporated some brilliant, long-term storytelling techniques and was probably massively influential, bla, bla, bla.

The special wasn't actually bad. It was just... simple. Direct. As inoffensive as it was unfunny. You know something? I'd have preferred outright bad. Really bad specials are still fun. They hold my attention and move along at a clip. Before I know it, they're over, and I'm laughing and thinking of all the interesting things I'm going to say about them.

But this... this was just boring. It wasn't sweet or endearing, regardless of how hard it was trying to be. You could tell that this really wanted to be the next "It's Christmas, Charlie Brown," but it the result wasn't even as worthwhile as the Peanuts special's sequels. The story was your typical, contrived "true meaning of Christmas" nonsense. The animation was fine, the voice acting (some of which was apparently provided by the comic's creator's family) was good, and the music wasn't bad; the production values and heart were in the right place, but as a whole, it was just vapid and void of inspiration or comedy.

Unless you're a big fan of the comic, I suggest staying clear of this one. I know my situation is a bit different than yours, but after about thirty specials over two weeks, mediocre specials like this are the ones that are the hardest to get through.

This was released on VHS, but at $22... yeah. Why don't you just head over to YouTube and watch it there?

Or, better yet, you could just do something else.
80's Dramedy Erin Snyder Special Sucks