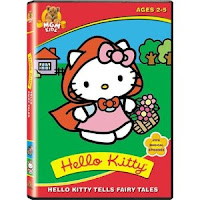 Until now, I've never seen an episode of Hello Kitty's Furry Tale Theater.  Hell, I'd never heard of the show.  Ignorance, of course, is bliss.

There are myriad things wrong with this.  The jokes are trite, the animation is crap, and so on and so forth.  But the real issue here is that they're not so much adapting or paying tribute to the original as they are outright stealing the idea.  Yeah, they're doing it openly, but that doesn't change the fact it's still basically a version of the Grinch.

If they'd changed either more or less, it wouldn't be pissing me off as much.  If they'd done it as either a parody or a straight up adaptation, it would have had a point.  But doing the basic premise with a few irritating changes just feels like plagiarism.

This is garbage.  If your time is really worth so little, Hulu has this up for the holidays.