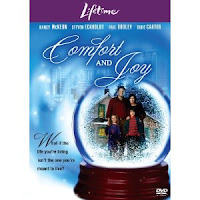 At one point during this Lifetime Original made-for-TV movie, Lindsay pulled my hand away from my head to keep me from literally pulling my hair out of my head.  I tried to explain that I knew what I was doing, that it was distracting me from the pain.  She stopped me anyway.  I think, in time, I'll come to forgive her.

This one was hard for me.  It's not that I'm a guy: I can take dramas, chick flicks, what have you.  But the thing is, I'm also a writer.  And, as such, there's a level of bad dialogue that will hurt me.  In high enough doses, it might even kill me.

Like most Christmas dramas, this was actually a science fiction film, though it buried that fact beneath five metric tons of melodramatic nonsense.  Even so, the plot was a pretty straightforward time jump: the main character, a self-obsessed career woman, jumps forward ten years in her life to find herself a wife and mother, dutifully living out her husband's philanthropic dreams.

We spent a solid fifteen minutes trying to determine whether this was in fact a time jump or alternate Earth.  While character interactions implied the former, it ultimately didn't work - why wasn't anyone (including her parents) any older, why didn't the date ever come up, what about technological developments, major news events, and so on.

Well, it turned out it was a time jump, and the movie's writers just ignored these issues.

I can overlook that.  However, I have a harder time forgiving everything else about this movie.  First, there was absolutely no internal consistency or logic in how characters behaved.  The movie would swing from sappy melodrama to awkward comedy with such force, I couldn't tell which they were going for half the time.

Is that all?  Oh, not even close.  Stupid cliches about life being about more than money, I can overlook.  But when they're incorporated into cheap philosophical debates about sacrificing money for things that matter while the characters are buying hundred-dollar toys for their kids, I start having to stifle screams.  Add to that an evil stepmother who makes the queen in Snow White seem well-rounded in comparison, children whose mental capacity shifts from scene-to-scene, and a "perfect husband" who's too stupid to remember his wife has amnesia because someone thought it would be funny.

Okay.  When I review a movie I love, I almost always nit-pick a couple details.  Here's the flip side: there are two moments this movie did right.  No, I take that back.  They handled two scenes not entirely wrong.

First, when the main character arrived in her future, while it took her a little too long to figure out what was happening, her reaction to overwhelming evidence felt realistic.  Secondly, there was one scene - when her kids woke her in bed Christmas morning - that was actually funny.  I found myself laughing a couple times in that scene.  These were the only times I laughed with the movie instead of at it for its entire hour and a half run time.

You can find this on Amazon