Yes, Virginia, Macy's is cashing in 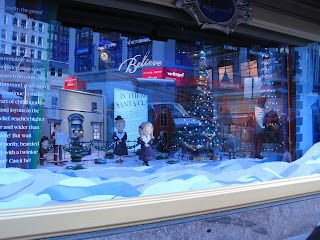 I'm underwhelmed by Macy's "Yes, Virginia, There is a Santa Claus" themed window display. Technically, it's actually quite impressive: there's some ingenious design and use of movement and perspective at work, and, thanks in part to a voice over, they actually manage to convey the story in a manner you can follow.

No, my issue here isn't technical: it's personal. "Yes, Virginia," in all its incarnations, grates on me. It brings out my cynical nature.

Oddly enough, I actually kind of like the editorial itself. Sure, its got logic problems (the burden of proof always lies on the party proposing the existence of the entity in question: come on, that's obvious!), but it's also really pretty. Plus, in the part everyone cuts, Church talks about fairies.

No, my real issues aren't with the editorial: they're with the story itself, starting with the deification of Virginia O'Hanlon. That isn't to say there was anything wrong with the girl who wrote the infamous letter - as far as I know, she was a fine kid. But, frankly, she's just a kid who wrote a letter asking if Santa was real.

The interesting person was Church, who composed a beautiful (if somewhat exaggerated) reply. It's telling that the editorial makes no mention of religion, considering how often Church's writing is read as an affirmation of faith. He certainly uses the word, but given the context, along with his repeated discussion of fairies, I don't think he's using it the way a lot of people would prefer.

Over the years, this relatively simple and commonplace interaction - Virginia is hardly the only child to write into a newspaper - has taken on mythic proportions. Any reality has been ignored, as the story's been exploited for personal, religious, or monetary (looking at you, Macy's) gain. Meanwhile, any fantasy of the kind Church was trying to inspire is passed over in favor of melodrama.

You can read the original editorial on Wikipedia, which also has some interesting details about the history in question. Did you know Virginia was a single mother? Or that she got her doctorate from Fordham and worked in the New York City School System? Or that the letter she wrote was lost, believed destroyed in a fire, only to show up on an episode of Antiques Roadshow in 1998?

Tell me that isn't more interesting than the drivel in the legend.
Article Erin Snyder