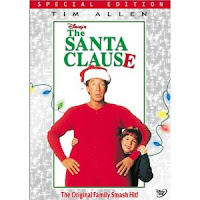 I don't recall having liked The Santa Clause when I saw it years ago (probably when it aired on TV sometime in the 90's), nor do I recall thinking it was a "good" movie.  But I have vague recollections of seeing it and thinking it wasn't an excruciatingly painful experience.

Turns out my memories were distorted, because that was kind of awful.  I mean, I was expecting it to be an obnoxious vehicle for Tim Allen.  And I was expecting the fat jokes as the new Santa took shape.

What I wasn't expecting was the abysmal acting from just about every minor character.  Nor was I ready for reindeer fart jokes or anything of the sort.

The movie has an interesting premise, which is almost certainly lifted from Piers Anthony's "Riding a Pale Horse," save that Tim Allen becomes Santa instead of Death.  Portraying "Santa" as an office rather than an individual has merit, though it certainly doesn't get enough exploration.  Actually, the movie was showing some promise in the first third.  I laughed a few times when Allen stumbled through his first night as Santa, telling kids off and destroying property.  Plus, the design for the North Pole was somewhat inspired, at least when compared to most of the live-action interpretations I've seen this year.  While the majority of the elves were obnoxious, the two main ones were kind of cool.

Yeah, the movie was almost amusing for about fifteen minutes.  It was never good, but it was mixed for that duration.

Then we move on to fat jokes, a plot dependent on a legal system denying a father visitation rights because his kid believes in Santa, and characters so two-dimensional my refrigerator magnets are more developed.

So.  While there are a few watchable minutes, they're buried in an unwatchable heap of garbage.  Don't waste your time trying to dig for them.

We ordered this from Netflix.  If you really want to see this for yourself... you know what?  Just don't.
90's Comedy Erin Snyder Movie Sucks