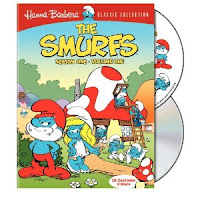 I saw this about eight years ago on Cartoon Network, and I never forgot it.  When we were listing specials we had to track down, this was high on my list.  Very high, in fact.

Why?  Is it good?  Of course not: little - if anything - about the Smurfs is deserving of that title.  No, it's not good.  But I'll be damned if it isn't gloriously and hilariously bad.

This is one of those specials you need to see to believe.  You see, it's Christmastime in Smurf village, some kids are lost when their sleigh overturns, and Gargamel is up to his old tricks.  Then the devil shows up.

Oh, they never call him that, and he doesn't look like the devil: he looks like a Snidely Whiplash in a cape.  But he's the devil, complete with infernal power, contracts, and rules limiting his actions.  And he's kind of scary.

And what have the Smurfs to contend with cosmic evil?  A song.  Not just any song: they have what's easily the most grating, obnoxious, and stupid song ever written for any cartoon show.  You know that "la la, lalala la" crap they usually spew?  That's Beethoven's 5th Symphony compared to this.

The last 30 seconds of this special make no sense.  In fact, the sheer volume of irrationality in the final scene is so great, that logic cannot escape its gravitational pull.  If you set a calculator down next to the television when this is on, that calculator will never work again.

On the other hand, the kids think Papa Smurf is Santa Claus, which makes a weird degree of sense.

Overall, this is so bad, it's not even good: it's smurfing hilarious.  Track this down on YouTube or something.  It's awesome.
80's Erin Snyder Fantasy So Bad It's Good Special