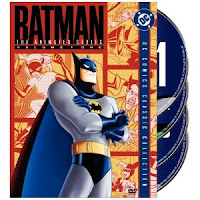 While Christmas With the Joker was the second episode made of Batman: The Animated Series, it didn't air until after about a dozen others.  So, while viewers already had opportunities to see the show's take on the Clown Prince of Crime, this was really the show's first try.

As in everything in this continuity (Batman: TAS, Superman, Batman Beyond, and Justice League), the Joker was voiced by Mark Hamil.  You always get the sense he's having fun with the role, but I'm not sure he ever had THIS much fun again.  There's a spastic intensity, a cruel joy, in his laugh that's kind of infectious.

As a whole, the episode's pace is a little off, but that's a lot of what gives this its charm: there's room for a lot of bizarre Joker moments they wouldn't spend time on later; it's a fantastic exploration of his character (though they'd refine and improve that character over time, giving him more complexity than he showed here).

In part because it's early, there are quite a few hiccups.  Scenes with the Joker's hostages are just weird... not funny, not scary; just odd.  Plus there are things like the "Operation Cause and Effect" scene.  This is the command Batman gives to Robin which causes Robin to blow something up.  It doesn't really involve causes or effects, at least not in a manner that makes sense.  It feels like there was supposed to be a more complex solution that got cut.

Likewise, the Joker escapes from prison by riding a giant Christmas tree outfitted with a rocket.  I'm neither clear on how that worked, how he set it up, nor how he survived the landing.  It's the sort of thing that would only have happened in the first season, while the show was still getting its footing.

Still, I really like this one.  I've been watching it every Christmas for years now, and I associate it closely with the holidays.  It's got some issues, but overall it's a lot of fun.

Recommended, though, if you're only going to see one of the holiday episodes of Batman The Animated Series, you're probably better off with Holiday Knights.  You can find Christmas With the Joker on Season One of Batman: The Animated Series.
90's Action Episode Erin Snyder Highly Recommended Superhero