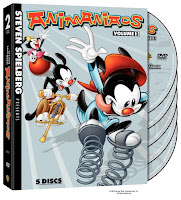 Now this show holds up.  There's an occasional dated reference, but in general Animaniacs is still really fun to watch.  There were two fully holiday-themed episodes released in 1993.

Most of this episode is a cute riff on A Christmas Carol, with the CEO playing the role of Scrooge and the Warners as the ghosts. It has a nice ironic twist that I enjoyed quite a bit, and an assortment of short original songs.

The second short in this episode is more or less a musical medley of Christmas Carols, loosely plotted around the Nativity. Now I'm often downright allergic to religion in my Christmas specials, but I actually found this fun and quite sweet.  The music is really well done, and a nice mix of spinning the lyrics into comedy and playing it straight.

As you can tell from the title, this episode is an assortment of shorts. It is a pretty great assortment, with the highlights being the first and last.  Twas the Day Before Christmas is an amusing take on Twas The Night... which stars almost every Animaniacs character, and rhymes throughout.  Yakko's Universe is of course a classic, although it was in an earlier episode as well.

There's another holiday-ish short: "A Gift of Gold", in a later episode, which is cute, but slightly sappy.

There were at least two more Animaniacs Christmas shorts, but those episodes haven't been released on DVD yet.  I was able to find "Noel" on Youtube, and it's a fantastic short that both parodies and celebrates the season.  It's right up my alley.

I recommend these episodes without reservation.  Almost anyone will find something to enjoy here.
90's Comedy Episode Highly Recommended Lindsay