By Lindsay - December 18, 2010
I remember watching these episodes in high school; they often aired back-to-back.  I remembered the basic plot of each, but little else.

Both of these shows are obvious, campy, melodramatic and purposely anachronistic.  I love them.

Hercules: The Legendary Journeys: A Star to Guide Them
(Season 3, Episode 9)

The premise here is that Iolaus and two other guys are called to attend something special (the birth of Jesus, obviously.) On the way they stop to save a country full of babies by deposing a Herod-like king.  It's basically just a normal week.

Corny?  Hell Yes.  These shows in general treated history like one big fun toy chest they could mix and match things from, so I'm not really bothered by the timeline problems inherent in the story.  Nor do I care that they mixed up Herod with a little Macbeth and a little Oedipus to create the main plot, and then it isn't even related to the Jesus part. 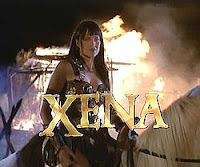 The premise here is a cute mash-up of Scrooge and Santa.  A greedy lonely king has banned celebration of the Solstice.  Xena and Gabrielle object to him foreclosing on orphans on Solstice Eve, so they reenact A Christmas Carol using the Fates as the Spirits, and enlist a former toymaker as their back-up.

There's a Toy-based fight scene!  Costume play!  Zaniness galore! Earnest monologues!  You have to just let it wash over you.  Baby Jesus gets to be in this one too, very briefly and nonsensically.  Again, no respect is paid or expected for anything resembling historical accuracy.

I had been watching a few early episodes of Hercules and Xena here and there since I discovered they were on Netflix, and I had been enjoying them, but not really loving them.  However, by the time these episodes were filmed, the whole franchise was really hitting its stride.  Its completely unabashed stride.

I love these episodes, but if you aren't already a fan of the tone of the shows, these maybe aren't the holiday specials for you.