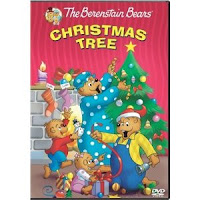 We saw this on a VHS tape we dug out of a box in Lindsay's parents house in Massachusetts.  It wasn't the worst thing we saw that weekend, but it certainly deserves an honorable mention.

First up, this deserves a spot on the list of unintentionally creepy animated production.  Some of the expressions the bears display are downright horrific.  Also, there's a scene towards the end where an eagle, upset that Papa Bear was considering turning his home into a Christmas tree, chucks an axe at the Bear family.  Almost got them, too.

For what it's worth, that eagle wound up having a change of heart.  After Papa Bear realized the inherent hypocrisy in cutting down someone's home for a holiday that was supposed to honor all life, the eagle, along with a brigade of other animals, did some Christmas decorating to ensure the Bear family had the best Christmas ever.

I think if I have to watch another special where a family, down on their luck, miraculously winds up having the "best Christmas ever," I might throw up.  We'll see.
Anyway, the cheap moralizing didn't go as far as the Bears' Christmas dinner.  In a particularly bizarre moment, they brought up the contradiction, and Papa laughed it off as an exception.  I'm not sure whether it's better they at least acknowledged this hypocrisy or not, to be honest.
If you're an adult, there's no reason you should be watching this.  If you have positive memories of these from your childhood, keep the memories: they're far better than this special.
If you happen to have young children, and you're looking for something they'll find fun... you know something?  You can still do a lot better than A Berenstain Bears Christmas Tree