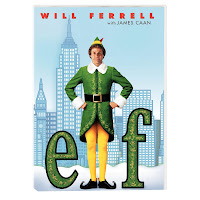 Erin loves this movie.  I just 'like' it.  So I'm going to take a moment to talk about my specific problems with the film, and there will be spoilers.  If you want someone to inspire you with all the reasons to see the film, read Erin's take.

I always like Elf more than I expect to and less than I feel like it deserves. On this viewing I tried to put my finger on what bothers me about it.

The beginning is great, to be fair.  The sets, the costumes and the effects all combine to set this firmly in the world of the classic Rankin-Bass specials. Everything with the elves is pretty good. Much of the rest of the movie is funny or cute, and most parts work well.

But on this viewing I realized that more than anything else, my uneasiness about this film comes down to the music.

Whenever Buddy does another joke where he sings ridiculously, I lose all built-up sympathy for the character.  I can't stand anyone singing badly on purpose, even an actor.  It's too far, it's stupid, and my pitch-trained ears cry out for revenge.

Then, in the big climax, music is an integral part, because singing builds the spirit they need to run the sleigh.  Which is fine, except that the song they choose is Here Comes Santa Claus.  This is not a rousing tune at the best of times.  It's repetitive and boring, and doesn't build to a climax.  Also the lyrics are chiding!  I don't find this song inspirational at all.  I know the writers must have been in a bind, to find a song that it was reasonable to assume the crowd would know, that's about Santa, and isn't total crap.

For all my problems with Christmas Carols, on average they are better songs than the tripe that's been written about Santa.

It's a shame, because a lot of the music choices are good, and the music under the opening credits is fantastic.  But those few problems just leave me with a bad taste in my mouth and stop me from really enjoying this film.