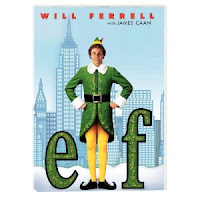 was supposed to be a bad movie, but that, somewhere along the line, someone screwed up and wound up creating something brilliant.

Consider the concept for a moment: this was obviously green-lit to be a Will Ferrell vehicle, where he plays a human raised in Santa's workshop who travels to New York to meet his family.  In addition, the script included one or more jokes based on each of the following: belching, vomiting, and eating disgusting and/or discarded food.

Yeah.  Clearly, this wasn't supposed to be a good movie.  It was supposed to be the lowest level of childrens entertainment: something that comes out, parents brings their five year-olds to see, then everyone - kids included - goes home disappointed.  That's all it had any right to be.

But apparently some producer at New Line didn't get the memo, because they hired Jon Favreau to direct it.  By the way, if you're looking for evidence that Favreau is a visionary, don't point to Iron Man (any director worth a damn could have churned out a solid flick with Downey, Jr. and that source material); point to this.  Because, like I said, by all rights this should have been awful.

It certainly shouldn't have been a classic.  Or one of the best Christmas movies ever made.

I've given this movie a lot of thought over the years in an attempt to figure out how Favreau managed to get the movie he ended up with.  After this viewing, I think I've finally got it.

The obvious approach to this movie would have been to treat it like a parody.  But Favreau approaches it like a fantasy film, then approaches that fantasy film as a character-driven drama.  Sure, the setting is derived from Rudolph, Miracle on 34th Street, and dozens of other holiday classics.  But he treats that setting - and the people living within it - with respect.  He takes the movie seriously, trusting the comedy to emerge on its own.  And it does - this is one the funniest holiday movies out there.
It also might be one of the most touching.

I've spoken to quite a few people who have told me they're reluctant to give this movie a shot because they - and I'm quoting here - "hate Will Ferrell."  I appreciate that sentiment (until I saw Elf, I used to share it).  But trust me on this one: Elf is a film you need to track down.  If not for me, do it for Jon Favreau: that guy gave us two Iron Man movies, as well as the upcoming Cowboys and Aliens: he's earned the benefit of the doubt.
00's Comedy Erin Snyder Fantasy Highly Recommended Movie