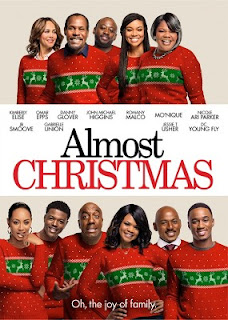 As far as sub-genres go, "dysfunctional family at Christmas" may have one of the lowest hit rates out there. Most of the ones that work do so by incorporating alternative genre elements to make the concept fresh: The Lion in Winter, Arthur Christmas, and Fred Claus all spring to mind. Those are technically great Christmas movies about a dysfunctional family over the holidays, but the dysfunctional family isn't the part of the synopsis most people would focus on.

Almost Christmas, on the other hand, embodies the more traditional trappings of the sub-genre through and through. If you were to sit down and make a list of tropes you'd expect to find, you'd wind up checking most of them off. There are the siblings who despise each other, the family member with a drug problem, food getting destroyed, a decoration mishap, a wedged in love story... you get the idea.

The substance of this movie certainly isn't original. However, there is one fairly original element: it's actually good.

The movie chronicles the first Christmas this family's had since the death of the matriarch. If they'd just used this as a side note or minor detail, it would have felt trivial. If the movie had only focused on this, it would have fallen in a different genre entirely. Instead, it manages a precarious balancing act, straying back and forth from comic hijinx to somber reflection. This could easily have clashed, but instead the drama lends context to the comedy. The movie paints a portrait of a family lashing out in ridiculous ways because of grief.

This works, because they show an unusual amount of restraint for the sub-genre. There are numerous moments where they could have devolved into comic shenanigans but instead pull back to something believable. As a result, we were more willing to give the movie some slack in the moments it does go for the easy joke.

Depending on how you look at plot, this either has next to nothing or it's packed. The movie has, by my count, seven characters with prominent roles. Danny Glover, playing the patriarch, is the heart of the movie, but - aside from trying to hold his family together, cope with his grief, and recreate his wife's sweet potato pie recipe - he's more of an observer for most of the story.

The subplot centering around his two feuding daughters, one a divorced mother and the other married to a former athlete, probably has the most twists. Some of this comes off a little forced, but it works far better than it has any right to.

Same goes for the rather cliched youngest son, who's addicted to pain medication and winds up in the hospital. We've seen all of this before, and there's arguably an "after school special" vibe to it, but like the movie in general, it's so well anchored to loss and grief you forgive the shortcomings.

Not everything in the movie works. There's a bizarre scene in the middle built out of a quasi-rape joke that should have been cut (it's not as bad as I'm making it sound, but it was a low point). Likewise, a storyline built around a son running for public office pushes the limits of how sappy I'm willing to let a movie be and still call it good.

But it doesn't break those limits. The movie's flaws were pretty minor, while its merits stood out. It wasn't perfect, but - without stretching the definitions of the sub-genre - it really was about as good as a "dysfunctional family holiday film" has ever been.

If you're looking for a movie with that premise, then I'd recommend checking this out. Because, contrary to what its fans would tell you, National Lampoon's Christmas Vacation is a piece of crap. Almost Christmas might retread some of the same ground, but it does a far better job of it.
2016 Comedy Drama Dramedy Erin Snyder Highly Recommended Movie