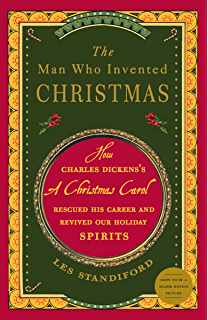 The Man Who Invented Christmas: How Charles Dickens' A Christmas Carol Rescued His Career and Revived Our Holidays Spirits
Les Standiford, 2008

Premise: The story behind the story of A Christmas Carol.

This historical Christmas book included both some really interesting parts and a few things that I've read a dozen times by now. Overall it was pretty enjoyable. If you are a literary type and you want to read only one Christmas history, this would be a great choice.

The best parts were Dickens' personal and professional history, including the details of the development of the story and the publication business of the time. There are some details about attempted plagiarism that were especially entertaining.

I enjoyed the portrayal of Dickens' attitudes about Christmas and the impact of A Christmas Carol. The author's affection for both the book and the history is very clear, and the writing maintains a good balance between compelling writing and educational material.

The only place it falls short is in fulfilling the promise of the title. Despite what he says, the author doesn't seem to really believe that Dickens "invented" the modern Christmas, and in fact, makes a decent case that his influence is sometimes overstated. He does make a case that the immense popularity of Dickens' book contributed heavily to the spread of certain traditions.

This is a lovely book, and as I am writing this review before seeing this year's movie adaptation, I am very curious how that will turn out.