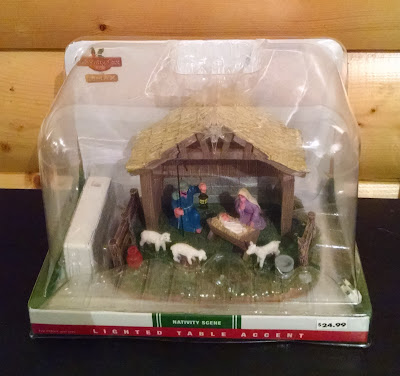 This review is yet another in our long and prestigious series on crap we found clearanced for damn near nothing - this display piece was left lingering in the clearance aisle of K-Mart into January. While there may not have been room in the inn for this decoration, there was space in our closet.

Lemax does a lot of miniature pieces, some of which make decent stand-ins for table-top gaming and toy displays. I considered this a pretty nice find: these usually sell pretty well, in my experience. If I'm remembering right, this one was going for 75% off, which felt like a deal, even with one of the lambs broken off (Little lamb, who broke thee? / Dost thou know who broke thee?). 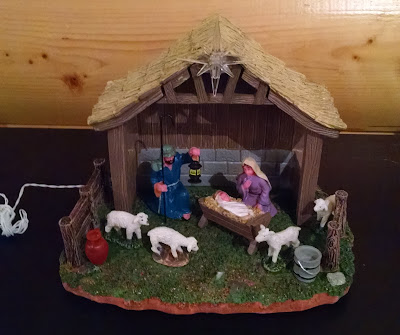 Here's the piece out of its packaging with the broken lamb put back together again. We'll pretend I glued it down instead of just balancing it on its broken feet.

First reactions: this isn't a bad piece overall. The grassy display and manger look good, as does the fence. The back of the stables is sculpted and painted, which is a nice detail that's sometimes overlooked. 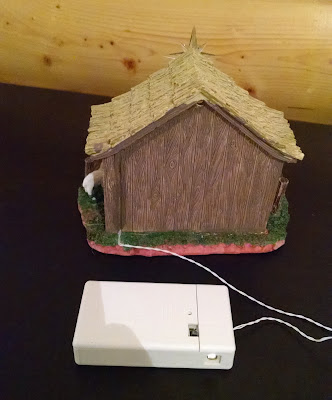 I'm less enamored with the ugly white wire and battery pack - would it have cost that much more to make these black or brown? Also, what the hell is up with the neon-colored skin on the humans? 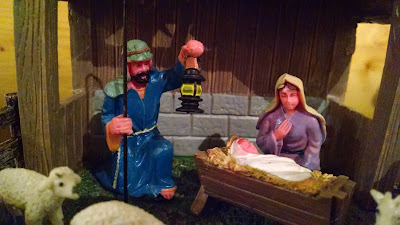 And while we're complaining about the people, let's take a moment to reflect on the fact that the lantern Joseph's holding is clearly about 1800 years early.

Obviously, the paint on this thing really doesn't fare well under a magnifying glass, but that's forgivable at this scale. 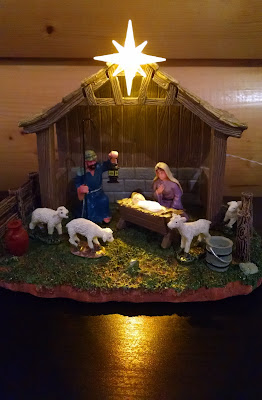 Alright. Turning the light on erases a lot of sins. I'm not sure if this was intentional or if they just got lucky, but the fluorescent orange paint looks a lot closer to a natural skin tone when you flick the switch. The star is bright and well-placed, at least relative to the figures (clearly, its placement is a little odd from a logical standpoint).

All in all, this could have been a lot worse. It's not a work of art, but it's a decent display if you're looking to recreate the birth of Jesus in a micro-scale. Is it worth $25? Probably not, but it's not absurdly overpriced at half that (which is easy enough to pull off, providing you wait for a sale).

In closing, here's a picture of a Kaiju-sized Mensch on a Bench attacking the stables, as described in the Gospel of Luke: 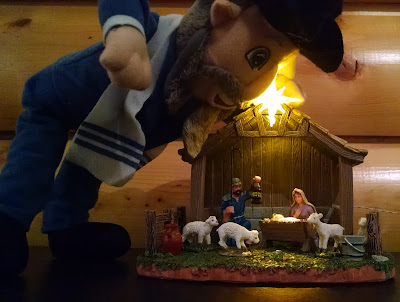