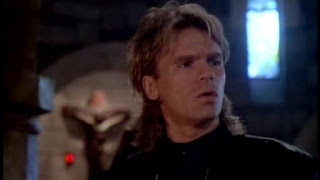 MacGyver has achieved a sort of immortality, though it's fairly limited in scope. The show revolves around the title character's skill for whipping up solutions to his problems using scientific know-how and odd combinations of everyday objects. His name has become synonymous with this trait.

As far as I can tell, that's all the who is remembered for. If this episode's any indication, that's probably for the best.

To be fair, this almost certainly isn't a typical episode of the series, which sounds like it changed quite a bit from season to season. This one's from the latter half of the show, after budgets were cut. And even then, it's less bad than ridiculous.

If you've seen other action shows from this era, you've got an idea what you're in for. The show is ostensibly serious, but it's family-friendly to the point of absurdity. Moralizing and inoffensive social commentary permeated the episode from beginning to end, all without saying anything of substance.

But I'm getting ahead of myself. Let's start with the premise: this episode is about a Madonna statue that comes to life and performs a series of minor miracles to help "the Challenger Club" and a bunch of people connected to it.

So this episode is magical realism, and MacGyver actually accomplishes very little compared with the aforementioned magical statue. I'm going to go out on a limb and guess this probably wasn't indicative of the series as a whole, but damned if I know for sure. Last time I saw any of these, they were airing in the 80's, and I wasn't much of a fan then.

The episode opens on Christmas Eve in a Catholic Church where a Madonna statue vanishes. Everyone there assumes it's been stolen and is heartbroken.

Elsewhere, MacGyver rescues an old homeless woman who's being harassed by a couple teenagers who have nothing better to do on Christmas Eve than steal her shopping cart. MacGyver helps her out and brings her to the aforementioned "Challenger Club," which seems to be some sort of homeless shelter/after-school program/orphanarium or something. The episode was a little vague on their mission statement.

But if you think the writers were above having a new owner trying to foreclose on the club on Christmas Eve, get ready for a surprise.

Yes, they've got one day to raise almost ten thousand dollars. They're hoping that the Christmas Eve fundraiser will do the trick, but they're having trouble getting the older kids to help out. One, in particular, feels like no one understands him or something. But then the old woman/statue come to life uses her magic powers to beat him at a game of pool, and that changes everything. For some reason.

She also uses her magic to clue MacGyver into the missing statue, so he'll go hang out with the priest, an old friend of his. This eventually helps him come to terms with the death of his mother, which in turn helps him overcome his seasonal depression.

I could explain why I just wrote that, but doing so would make all of us a little dumber. Suffice to say, MaGyver's emotional journey through this episode felt like it had been written by a third grader. And acted by one, too. I know Richard Dean Anderson is capable of better, but he spends most of this episode staring blankly forward with an expression that's supposed to convey a rich depth of emotional trauma and compassion, but honestly reads like sleep deprivation. 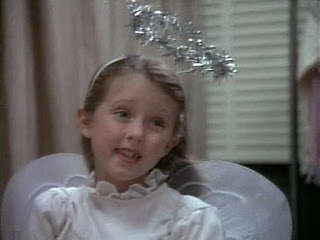 Since the mystery he's trying to solve (the missing statue) solves itself after forking over the cash to save the Club, there's not much for him to do plot wise, either. His two big contributions are showing kids how to use dumbbells as wheels and having a conversation with a six-year-old with stage fright (this sets up the ice cream thing, incidentally, which... damn it! NO! I AM NOT GOING TO EXPLAIN THIS!).

The magical homeless Madonna statue is the real hero here - everyone else, MacGyver included - just meander around looking bored or annoyed.

As a piece of random magical realism, it's dull but not awful. The threads are all tied up, and there are a few fun moments. But the boring far outweighs the good here, even with the unintended humor of seeing MacGyver's recurring impression of a deer in the headlights.
80's Action Episode Erin Snyder