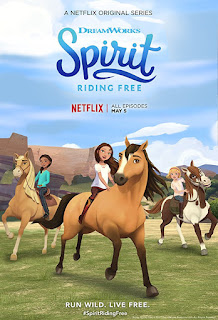 I have never seen the Dreamworks animated movie Spirit - Stallion of the Cimarron, but Wikipedia tells me that the point was that it was about a horse whose rightful place was running free, untamed by man. So I'm not sure why the Netflix spin-off series follows a girl who befriends a wild horse (also named Spirit) such that he follows her around and hangs out in town all the time. Seems... wrong.

But hey, there's money in dolls that ride horses.

We also couldn't figure out when this takes place. The lack of cars, one-room schoolhouse, and prevalence of farming seems to imply a vague "frontier" time, but the clothing and the writing seemed plausibly modern. Based on this episode, we decided that it could take place anytime between the 1880s and the 1980s, but if someone pulled out a cell phone, we wouldn't be that surprised.

The episodes seems to follow the lead girl, her friends, Spirit, and the friends' horses as they go on inoffensive Babysitters-Club-style adventures. In the Christmas episode, this is playing Secret Santa for all the other kids in town, because supplies can't reach their location due to some weather (which we never see). Apparently no one's parents think of buying presents until the day before Christmas on the frontier.

We have to talk about the lead. She's a city girl who is still adapting to moving to a small town. Her mom is dead or otherwise absent; she lives with her dad and her... aunt? It took us a while to figure that one out. Her name is... Lucky.

Lucky? Lucky is a name for a dog, or a horse, or the baby My Little Pony that you could only get through a special catalog order in 1986. It made me cringe a little every time they said it.

THEN I went to the internet and found out that the character's nickname is "Lucky" because her name is Fortuna. But NO one, not even her dad, called her Fortuna. It's like they're whitewashing their own diversity.

Anywho, as I said, the plot follows the girls' preparations for Christmas, their decision to pretend to be "elves" as a gift to the other kids, and then creating and delivering the gifts. This allows for plenty of "humor" such as a little boy (brother to one of the friends) who keeps almost finding out their plan and horses tiptoeing behind girls and contorting themselves into awkward positions to avoid being spotted. There's also a B-plot around Lucky's aunt befriending the Christmas goose and more slapstick around that, and a C-plot about Lucky's dad wanting to date the town schoolteacher and Lucky's feelings about it.

In the midst of all this, Lucky also finds out that the wild horses go hungry during the winter, and the girls bring them some food. This is underscored with music and meant to be moving. Instead it's just out-of-place and awkward. Plus, Spirit is established to be smart and independent; it seems like they're courting a horse revolution by flaunting the goodies to be had in town.

Even given all the issues, it's better looking than Horseland and smarter than the new Strawberry Shortcake. It's not terrible for bland kids animation, but it tries to be more than that, and, in our opinion, fails.