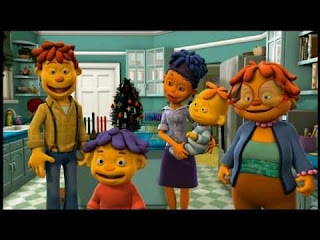 Sid the Science Kid is an animated show for preschoolers, so there are specific questions you might need to ask before judging it.

Question 1: Is it at all interesting for adults without kids?

I enjoy a lot of children's television, but this is not a show that holds any value for adults who don't deal with children, except on a technical artistry level. The show is produced by the Jim Henson Company, and the animation is actually generated in real time from motion capture and digital "puppeteering."

This allows them to film fast and give the characters a lot of physicality. On the other hand, it doesn't always translate to fine control. for example, I noticed one secondary character manipulating a prop in a particularly clunky way.

Question 2: Is it interesting for the target group?

I haven't polled anyone, but it's won some awards. I was rather struck with how real the kid characters' dialogue seems: the kids respond too literally or somewhat vaguely at times. On the parents and teachers side, the show is well constructed. Each episode features a simple science experiment, demonstrated by footage of real kids. Each idea is clearly explained, without too much extra detail. All the kid characters are praised for asking questions and sharing their ideas.

But, if you're reading this blog, you already know what "temperature" is, so it's not like you're going to get anything out of this episode.

Question 3: What about Christmas?

This episode takes place at holiday time, and Sid is concerned that his family is going to travel to visit relatives for Christmas. Where he lives, it's warm all year round, but his aunt lives in Minnesota, so he's not sure he likes the idea of having to change their celebration because of cold weather.

Sid goes to school, and he and the other kids explore the idea of feeling cold, do an experiment with taking temperature readings, and listen to a song about the different kinds of weather that can happen on the same day in different places. After this, Sid is happy about the idea of going to his aunt's house, and he makes up an idea to build a room that could make it winter anytime.

Like many shows for preschoolers, it features segments and songs (including traveling to school, polling his classmates, getting home, making up an invention at the end) that recur in every episode.

One significant holiday aspect in this show that we've never seen before is that Sid's family celebrates Christmas, Hannukah, and Kwanza. Yup, all three! It caused me to look harder at the character designs. Sid is... yellow. I guess his mom is a darker yellow-beige, and he and his mom have blue hair that could be dreadlocks or braids. But many of the other characters have sort of similar claymation-like hair shapes as well.

Layering on these specific holidays really made me look again at these "cartoony" character designs and think about what color means in a show like this.
00's CG Edutainment Episode Lindsay