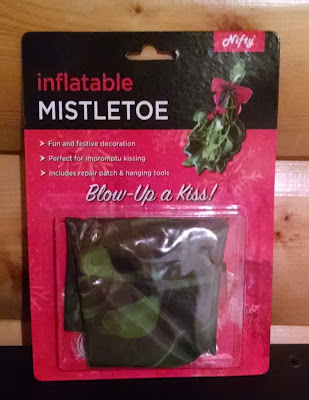 Before we begin - before I say one more word - I need to clarify something. The use of the term "Nifty" in the title is only in service to accurately providing the branding for the item I am reviewing. It should not under any circumstances be viewed as a descriptor.

Because, dear reader, the object I am discussing is not nifty at all, nor is it rad, far-out, hip, or mod. No, I fear it is instead quite square.

First, some background. This was found in the post-apocalyptic wasteland of the after-Christmas "men's gifts" section of a Fred Meyer last January, when it was marked down by 90%. "Marked down from what?" I'll pretend you asked.

I'll let that sink in for a moment. Twenty. Goddamned. Dollars.

I know what you're thinking - you're thinking I paid two dollars for this for the express purpose of mocking it in a review. You're thinking I'm going to say that it's below the level of quality you'd expect to find at a dollar store and that I feel cheated at 1/10th the retail price.

In hindsight, that last paragraph really should have included a spoiler alert.

But before we rehash all that, let's discuss the packaging. This is ostensibly a gag gift, so the exterior really needs to carry most of the weight. In this case, the design and selling points really do a good job illustrating why this remained on the peg so long into the season. 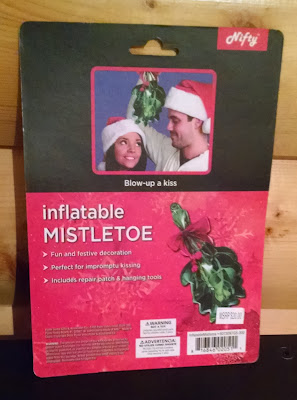 This is the other side of the packaging. In the lower right-hand corner, you can actually see the $20 price tag, in case you thought I was lying. But, no: at some point, someone actually thought people would pay $20 for this.

At the top, you see a picture of a man displaying the inflatable mistletoe to a woman. Both of them are improbably wearing Santa hats, and the woman is not slapping the guy who actually seems to think holding an inflatable green blob over his head will get him action.

Both sides of the packaging make three sales pitches. I'd like to address these in turn:

1. Fun and festive decoration: Factually incorrect. There is nothing fun about this, and it would make a horrible decoration.

2. Perfect for impromptu kissing: Also false. This is garbage. If anyone still considers mistletoe anything more than a dumb joke, they can buy actual mistletoe or well-made facsimiles for far less than $20. 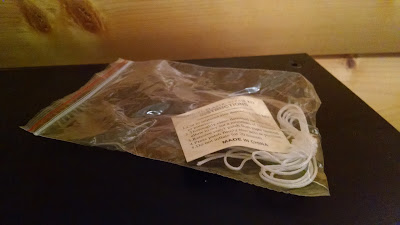 In case it's not immediately apparent, the "hanging tools" is a piece of string, and the "repair patch" is basically a two-inch long piece of clear tape. 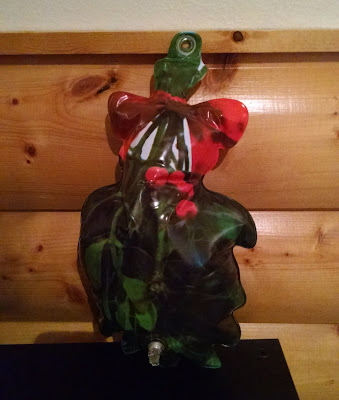 Okay, technically this may qualify as less. It's a little more than a foot long, and it smells like plastic. And, honestly, if I hadn't told you this was supposed to be mistletoe, could you even tell?

Again. They wanted twenty dollars. Not cents - DOLLARS. For a crappy balloon, a piece of string, and a patch no one would ever use, since no one would ever want to repair this if it broke. Unless, I suppose, they were writing this up for a review and realized testing the patch would be a great excuse to stab the thing with a pair of scissors.

I didn't quite manage to fix it, though I didn't really try all that hard. Regardless of whether the patch works, it's still not worth $20. Or, you know, $2. Seriously, it's far cheaper to buy a pack of post-its, write "I am a douche" on one, and stick it to your forehead. That's basically going to have the same effect on your chances of picking someone up at a holiday party using one of these things.
Erin Snyder Sucks Toy