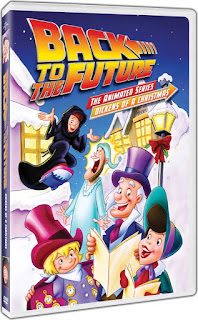 I don't remember this series, but I recall the era it comes from well enough. Prior to Batman: the Animated Series, cartoon shows - particularly those adapted from live action movies - were mainly cheap cash grabs produced by networks trusting a lack of alternatives would force their audience to tune in regardless of quality.

Yup, even with no recollection of this particular show, this brings back memories of Saturday mornings spent staring blankly at the TV in the idle hope something worth seeing would air.

This series ostensibly picks up after the movies left off, following Doc Brown and his family, along with Marty, as they adventure through time. I assume Marty was lobotomized earlier in the season because his intelligence level is significantly lower here than in the movies.

The animation is extremely toonish - this is closer to Looney Tunes than anything resembling realism. The tone is spastic, trusting on a barrage of slapstick gags to keep kids engaged.

A few actors reprise roles - they got Steenburgen and Wilson back as Clara and Tannen - but everyone else is played by voice actors. I find it particularly odd they didn't use Christopher Lloyd, since he actually reprises the role of Emmett Brown in live-action segments at the start and end of each episode. While Dan Castellaneta does fine work, you can tell it's an impression.

Those live-action segments are probably the most notable aspect of the show. In order to provide a pinch of educational value, they show quick science experiments courtesy of Brown's "assistant," a young actor/scientist who also served as the show's adviser. And thus was the world introduced to Bill Nye.

Enough context! Let's get to the episode.

It opens in the middle of summer. All the characters are cranky due to the heat, so Doc Brown decides to take them on a vacation to 1840's London at Christmas. As the episode's title implies, a deluge of Dickens references follow.

A series of mishaps splits the group up. The Brown boys chase after a pickpocket who steals the keys to the Delorean, their dad goes to rescue them, Clara gets thrown in jail after standing up to cruel landowner Ebiffnezer Tannen, and Marty tries to scare him into changing his ways.

The writers trip over themselves trying to tie everything together and cram in as much Dickens as they can. The Oliver Twistian plot with Emmett's sons kind of meanders until Brown cites Newton's first law and knocks them unconscious with a bunch of barrels. Meanwhile, Marty gets the more Christmas-y story as he uses his hoverboard to impersonate "The Ghost of Christmas" and scare Tannen into forgiving his debtors.

There's not much to like here, though I'll admit to liking that it's a projected video recording of a monster movie that gets the job done after more traditional methods fail.

There were enough Dickens call-outs to prove the writers' time in college (I'm guessing English majors?) wasn't entirely wasted, but none of these references really built up to anything worthwhile. It nods at Dickens; it doesn't offer any kind of statement on his work, and it certainly doesn't draw any parallels between the radical political ideas he preached and the political environment the show was made in.

Even more disappointing was the missed opportunity around the use of time travel. A Christmas Carol is, among other things, a time travel story; the presence of a time machine begs for this aspect to be explored. Instead, we're treated to yet another in a long line of fake hauntings. The Real Ghostbusters, ostensibly a similar premise as a spin-off of a genre-comedy, got this right in their Scrooge episode despite having to wedge in a mechanism for time-travel. Of course, that show also featured relatively realistic designs and better characterizations. Ghostbusters was far from perfect, but sitting through an episode of Back to the Future makes it look like a work of genius.

It's not that Back to the Future was worse than average for its time - most cartoons were at least this bad. But I kept wanting it to be more. The film series holds up well, and I'm convinced an animated spin-off could have worked. But it needed better writers, producers who cared about the finished product, and a decent budget. This had none of those.

The most interesting aspect of the episode might be its use of the "Christmas in July" trope. We did a number of those a few years ago, and I don't recall a single use of time-travel to bridge the seasonal gap. In that respect, at least, this seems to be somewhat unique. Beyond that, there's very little reason to seek this out.
80's Christmas in July Comedy Episode Erin Snyder Science Fiction