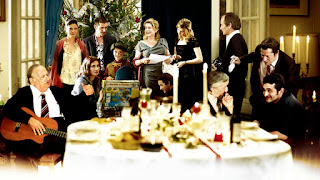 Un conte de Noël, or "A Christmas Tale," is a French movie about a dysfunctional family reuniting for the holiday due to Junon, the matriarch, contracting leukemia, the disease that killed her firstborn son, Joseph. She's hoping to avoid this fate herself, but for that she needs a bone marrow donor. There are two candidates: her middle child, Henri, who's something of a drunken failure, and Paul, the mentally ill son of her oldest daughter, Elizabeth, who despises Henri.

What else can we throw into the mix? Well, her other surviving son's wife has been loved from afar by her husband's cousin, Henri's girlfriend seems to take great joy in watching him get beaten up, and there might be some sort of ghost wolf wandering around the house.

Of all the movie's unanswered questions, I regret not finding out more about the ghost wolf the most. Is it the spirit of Joseph? Or maybe it's the matriarch's mother's ghost. It's unclear.

Also unclear is where Elizabeth's hatred of Henri originates. The movie dangles these questions in front of the viewer like a carrot on a stick. Think Marsellus's briefcase in Pulp Fiction: the answer to the siblings' animosity is given physical form at the end, and we aren't shown.

If you're looking for a point to all of this... near as I can tell, that's it. There's a Nietzsche quote late in the movie about trying to piece together knowledge of oneself, and the difficulty of constructing a narrative based on memory. That seems to connect with an earlier line from Henri about feeling like he's in a myth but doesn't know which one.

Of course, this movie has LOTS of important sounding lines and moments - I could easily be lending too much weight to those two. It's a weird ass movie.

Weird, but fascinating. The characters, while not exactly likable, are intriguing, and the dialogue is often hilarious. The tone shifts and transforms, at times feeling like a light comedy, a drama, or even venturing towards suspense. Hell, I spent most of the movie half convinced someone was about to get murdered, a ghost was going to show up, or both. And of course neither of those things happened. I think.

Seriously: the French make weird movies. I haven't even mentioned the Midsummer Night's Dream stuff. You could (but probably shouldn't) interpret this whole thing as a re-imagining of that story.

Like everything else, it's not entirely clear why Christmas was selected for the setting. Obviously, the opportunity to play off the family gathering trope was at least part of the mix, but there's an argument tonal or thematic elements may have played a role, as well. The standard juxtaposition between the decorations and the dysfunction was present, and the eerie spiritual stuff seemed to tie in.

But, again, I don't want to spend too much time dwelling on metaphor in a movie that seems to be about the inability to interpret the past.

Besides, whatever the point was, the movie's strength comes more from its comedy and quirky direction. It's an engrossing, funny movie, so long as you're willing to pay attention and accept it's not going to answer all (or any) of your questions. Take it on those terms, and there's a lot of whimsy to be enjoyed in this thing.
00's Comedy Dramedy Erin Snyder Movie