Fresh Off the Boat: The Real Santa and Where Are the Giggles? 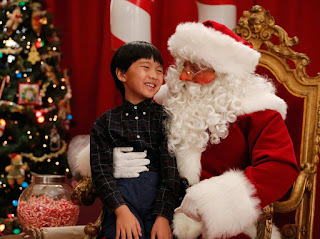 Here's what I knew about this show going into the first Christmas episode: It's a sitcom about a Taiwanese family in America, and it's based loosely on an autobiography. I had read this piece about the author's...let's say complicated... feelings about Hollywood back when it came out.

Here's what I know now: It's about a family with three young sons, the dad owns a restaurant, they're friends with their neighbors, and on a certain level it's nice to see that today a sitcom that doesn't star white people no longer has to be exceptional to succeed.

Apparently the first season of this show was more Wonder Years-esque and focused on Eddie (the young version of the chef whose autobiography I mentioned above), but there wasn't a Christmas episode in that season. Both these episodes are more about the youngest brother, Evan, and his relationship with his mom, Jessica. 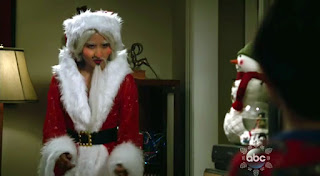 There was a lot of decent humor in this episode. I loved Jessica's weird relationship with an extensive model Christmas village and all the little characters therein. I liked the subplot about Eddie and Emery (the middle brother) getting presents for her. Emery is a fastidious planner and Eddie is a slacker, and while the plot wasn't unique, it was cute. I especially liked when their grandmother supported Eddie's argument that thoughtful gifts aren't actually more appreciated.

Unfortunately, none of that was the A plot. The A plot followed an escalating situation between Evan and Jessica, in which she kept trying to "improve" Santa, which kept necessitating more and more elaborate conspiracies and gimmicks to maintain the illusion. In the first example, she tells Evan that Santa is a scientist and has a doctorate, which requires her husband to get a different volunteer Santa for an event at his restaurant and prep him with math and physics notes. Things only escalate from there, culminating in her dressing as Santa and presenting a final theory: that a female, Chinese Santa is the secret boss of all the other Santas.

This isn't inherently a bad plot, and there was some humor in her quest to both encourage and manipulate her son with assertions like: Santa talks to his mother for an hour every day. But in the end it was just so surface-zany, that it fell flat for us. Not to mention a REALLY awkward scene in the middle that unpleasantly made fun of people who might be offended by a Christmas event at a public school. I know this is set in the 90s, but there are better ways to make that joke. 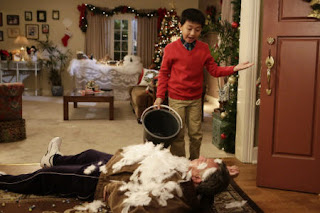 This episode attempts to mash up as many Christmas references as possible into one 22-minute sitcom, and the result, somewhat expectedly, is fractured.

The Huang family goes to the movies to see Jingle All the Way (foreshadowing number one), but Evan is left behind by accident. We've already name-checked Home Alone, so the references which follow aren't surprising. After a frantic phone call, neighbor Marvin goes over to check on Evan, only to slip and fall on some marbles.

Later, Jessica offers to buy Evan's forgiveness with a toy, despite him saying it's unnecessary. He asks for a Tickle Me Elmo. You see where this is going. After a bunch of searching, the only one to be had in the area is in the possession of a reseller who they had an altercation with at the movies. And the reseller needs a Santa for a party. Jessica breaks out her Santa costume from the previous year and terrifies all the children, but the reseller's husband sneaks her the toy anyway.

Meanwhile, Marvin is suing the family for his injury, despite swearing it's nothing personal, and the insurance will pay out. They're upset by this and almost end the friendship. Marvin is visited by three painkiller-induced Christmas Carol dreams that remind him that friendship is more important than money.

In the final scenes, Jessica finds out that Evan doesn't even want the toy, he just knew she'd feel better if it was something hard to get. They have a bonding moment.

It's not a horrible half hour of television, but it is fairly bland.
2015 2016 Comedy Episode Lindsay