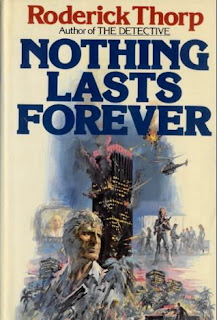 Nothing Lasts Forever is, arguably, the most influential Christmas novel written since A Christmas Carol, and if it's title hadn't been changed when it was adapted into a movie nine years later, I wouldn't have to explain why.

That movie, incidentally, was Die Hard.

I'm not sure what I expected from the book, but it wasn't this. I knew going in it was a sequel to a novel Thorp wrote in 1966 called The Detective. I've never read that, but I have seen the film adaptation, which starred Frank Sinatra in the lead role. It's pretty obvious from reading Nothing Lasts Forever that Thorp wrote this with Sinatra in mind.

The plot. It's exactly the same as the movie's. Also, it's completely different.

The book starts with Joe Leland (they changed his name along with the title for the film) being driven to the airport on Christmas Eve. Leland isn't actually a detective anymore: he left that profession at the end of the first book and became a security consultant. There's a bizarre exchange with an angry driver and a fender bender, but Leland manages to make his flight. On it, he flirts with a stewardess and makes plans to meet up with her in the future.

Like the movie, he's heading to LA to reconnect with a loved one at a Christmas party, but here it's his daughter, Stephanie, who works at Klaxon Oil. Once there, he pieces together that she's sleeping with her boss and that most of the executives are drug addicts. Around this time, terrorists attack, and things shift into a lot of the same territory as Die Hard for a while.

He's still without shoes, he still kills Karl's brother and shoves him in an elevator with a sign (the ho-ho-ho and the Santa hat were added for the movie, though), he crawls through some air vents, uses a radio to communicate with cops outside and the villains inside... you get the idea. Almost every major action beat and set piece in the movie appeared in some version in the book, though a few were punched up in the adaptation.

But from the start, the tone was very different. Leland's clearly coming from a crime noir tradition, and his reactions and mood fit that mold. The entire story is told from his perspective, so we only learn what's happening outside or with the villains when he does. Plus, everything's darker, and the moral justifications aren't as clear-cut. First off, these aren't bank robbers this time - they're terrorists.

Okay, back up. They're terrorists as imagined in 1979, so think less religious extremists and more "German college students" trying to start a revolution. Their leader is certainly cruel - Leland recognizes him from a seminar where he looked at summaries of dangerous revolutionaries. And he lives up to his reputation when he executes the highest ranking executive. Only here that executive is far less sympathetic than in the movie: he's greedy and self-serving. Leland hates him and considers him part of what was wrong with society.

Like in the movie, Leland starts out wanting to save the hostages and his daughter (and himself, if possible), but as the story progresses, he becomes more and more bloodthirsty. Meanwhile, the terrorists become, well... a little more sympathetic by the end. They're killers, and they're portrayed as being wrong about the impact their actions will have, but their ultimate plan seems to be blowing the safe, raining the money inside on the city, and revealing the fact that Klaxon has been illegally selling weapons to a repressive foreign government.

Also, it seems as though they'd only planned on killing between one and three of the hostages - the VP they murder at the beginning and maybe the next two senior members, both of whom were involved in the illegal and unethical weapons sale. Of course, one of those is Stephanie, Leland's daughter.

So... yeah, she's not remotely innocent. At the end, when she's held at gunpoint by the leader of the terrorists, she apologizes to her father for getting him into this. None of this causes Leland's dedication to waver, however. He despises Klaxon and hates what his daughter's become, but he blames himself for her poor upbringing. And, once again, he's right to do so - he was an alcoholic, and she felt the brunt of his marriage falling apart.

And if you're thinking this sounds dark... believe me: we're just getting started.

The villains in the movie may have all been men, but in the book four of them are women. Leland kills the first in self-defense and is sickened by what he had to do. But one by one, it gets easier. Until... wait. I'm getting ahead of myself.

The showdown with the terrorist leader has many of the same elements as the one in the movie. He's holding Stephanie, Leland comes in supposedly unarmed, he has a gun taped to his back, his daughter has a new watch... you'd be forgiven for thinking this was going to play out the same. But this villain's a little shrewder than Hans was - he realizes Leland's hiding a gun on his collar. Stephanie then ignores her father's command to get out of the way and attacks the villain, who shoots her in the stomach. Leland shoots him several times, but his thumb winds up hooked around her watch as he falls towards the window, and...

And I honestly expected Leland to catch her like McClane does in Die Hard. Whelp, I was in for a surprise, because she drops out and screams all the way down. After that, Leland goes upstairs and finds the second to last terrorist alive, a young woman, who surrenders.

And then he murders her in cold blood.

He does this for two reasons: first, because he wants to. He wants to kill every one of the terrorists, and - by the time his daughter dies - he doesn't much care how. Second, because he needs to eliminate her as a potential witness. He doesn't want anyone knowing he tossed the money out the window in an effort to get revenge on Klaxon. And also because he's finally learned his heroic efforts to uphold law and order are ultimately meaningless. He didn't save his daughter; if anything, his presence may have gotten her (and others) killed.

It is established that there is a very good chance more hostages would have lived if Leland hadn't been there.

This is important - Nothing Lasts Forever isn't meant to end on a fun and energetic note. It's definitely intended as an action novel, but it's also meant to be a serious, literary exploration of the death of the romantic hero as an archetype. Heroes of the type Leland is trying to be will ultimately devolve into bloodthirsty killers.

To drive the point home, the character is attacked by Karl, same as in the movie, and Karl is shot by the cop Leland connected with over the radio (also same as in the movie). But first Karl manages to gun down a bunch of media, at least one cop, and - at the very least - seriously injure Leland.

I say at the very least, because the book ends with Leland slipping into unconsciousness. We never learn if he'll wake up, and - frankly - it feels like the implication is that he won't.

Besides exploring the limitations of traditional heroes, the novel also explores themes around cultural movements, struggles, and maybe the downfall of civilization. Aspects of this are bleak and bordering on nihilistic.

I can only assume Thorp hated Die Hard. Despite recreating several of his action scenes, it completely inverts the point of the book. This was supposed to be about the end of the romanticized action hero; instead, the archetype was reborn in Die Hard, which became the template for almost every action movie since.

I assume the book is set at Christmas mainly to exploit the juxtaposition of the seasonal trappings with the violence and bleak outlook at the heart of the story. It might also be working as a fake-out: this is essentially telling the first half of a traditional Christmas narrative (i.e.: family torn apart) then denying the reader the expected resolution, but there's nothing about that in Thorp's notes (they're reprinted in the back of this edition) so I'm probably over-analyzing.

Regardless, this was a solid book. It's extremely well paced, and even knowing where it was going (or at least thinking I did) the writing held my attention throughout. There are a handful of awkward moments where the POV character's stereotypes will make you wince, but overall it hasn't aged too badly.

I'm not sure I'd recommend it, simply because the coolest parts are in the movie, but if you're curious where that movie came from, I expect you'll find this as interesting a read as I did.
70's Action Book Erin Snyder Noir