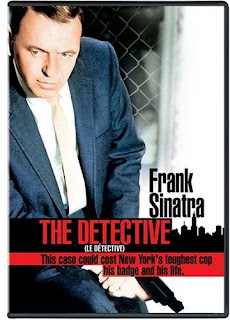 First of all, The Detective is not in any way, shape or form, a Christmas movie. It's not set at Christmas, and it isn't about Christmas, and I'm not claiming anything to the contrary.

So. Why am I talking about it?

While this isn't a Christmas movie, it is indirectly connected to one of the most significant Christmas movies ever made. The Detective is based on a book by the same name, and that book has a sequel called Nothing Lasts Forever which would be adapted into a movie two decades after this one. Unlike The Detective, the name "Nothing Lasts Forever" didn't survive the adaptation: they changed it to Die Hard.

In other words, The Detective is John McClane's origin story. Well, sort of. The main character in The Detective was named Joe Leland, and several details about his relationship with his wife were notably different. But other details, like him being a New York police detective who breaks rules, are consistent.

In some ways, I found the differences more interesting than the similarities, though. The Detective embraces its noir roots: it has far more in common with Chinatown than Die Hard. The movie has two connected plots with a third, separate plot about Leland's home life, so if you were hoping for simple, think again.

The movie opens at a murder scene where the victim appears to have been killed and mutilated by a gay lover. Leland tracks down the most likely suspect and manages to get a confession, despite feeling uneasy about the situation. The man they've arrested is psychologically unbalanced, and Leland - while believing he's guilty - questions his ability to know fantasy from reality. Leland's handling of the case gets him a promotion, and the suspect is executed.

Through all of this, a series of flashbacks provide context for Leland's relationship, marriage, and eventual problems with his wife. The two are now estranged, due to a number of affairs she's had. She seems unable to give up her infidelity, leaving him to decide whether to condone the behavior or remain separated. He's unable to accept this, so he remains alone.

Time passes, and Leland is visited by an angry widow whose husband apparently committed suicide by jumping off a racetrack. A lack of eyewitnesses and motive have convinced the widow the police are covering up a murder. When Leland begins digging into the death, he discovers the deceased man was involved in a vast conspiracy to manipulate real estate prices at the expense of lives and neighborhoods. A number of wealthy and influential people are involved.

As Leland digs deeper, it becomes apparent powerful figures want this kept quiet. An attempt is made on his life, though he manages to kill his attackers. Finally, he breaks into the office of the deceased man's psychologist and finds recordings. But instead of revealing that he was killed by his co-conspirators, the evidence proves he did, in fact, kill himself. He was the one responsible for the murder at the beginning of the movie, meaning Leland helped convict and execute an innocent man.

He's offered the chance to bury this information and protect his career, but instead, he makes it public and resigns his position.

The movie is, at least in some ways, far more progressive than its synopsis makes it sound. While there are absolutely dated stereotypes around homosexuality, the story makes it clear this community is the victim of a judgmental society and over-policing. Despite relying on a story that calls for two mentally unbalanced gay men, the movie goes to great lengths to make it clear their issues aren't a byproduct of their sexuality. Compare this with Bond movies from the same era and this comes off as downright liberal.

Likewise, it shows the police in a shockingly unfavorable light. Police brutality is shown to be normal but never justified. We see this again and again - Leland is sickened by the actions of his fellow officers and he stands up to them on several occasions. The police, as an institution, are shown to be corrupt and unrelenting, protectors of an elite wealthy class that manufactures the environment that creates crime. It's Leland's drive to reach a point where he might be able to change some of this that causes him to inadvertently become part of the problem.

If anything, this is far more progressively minded than Die Hard, which is (let's be honest) something of a right-wing cowboy fantasy about an all-American cop taking out foreign criminals and saving the day. I love Die Hard despite this, but it's not exactly a nuanced story.

As far as his wife is concerned, I'm less clear about what the movie was trying to say. I can't tell if she was a stand-in for the corrupt class Leland was facing off against, or if we were supposed to view his inability to agree to an open marriage as a failure on his part. That's not too much of a stretch, honestly - her explanation for her aversion to monogamy is presented in the context of her past. It is, according to her at least, a part of who she is. The same idea - characters with sexual lifestyles outside of social norms - is presented elsewhere as being something that should be accepted, rather than shunned.

That said, the scenes with her Leland feel more like they're building sympathy for him than her. But I'm not certain one way or another. Maybe it was just trying to show an impasse with no solution: that's pretty common for this genre.

Overall, the movie is better than I'd have expected, but not quite good enough for me to recommend. Sinatra does good work, and the film is good for its time, but the "for its time" qualifier is significant. The real selling point for modern audiences is that this is really an early modern re-imagining of noir. But that's a double-edged sword: if you want a nuanced, thoughtful noir, there's no shortage of more recent films that do this better. On the other hand, if you want something dated and fun, this is going to be a little heavy.

But if you're a big enough fan of the genre or - like me - are extremely curious about the almost-official precursor to Die Hard, this might be worth checking out.
60's Drama Erin Snyder Movie Noir Not Christmas