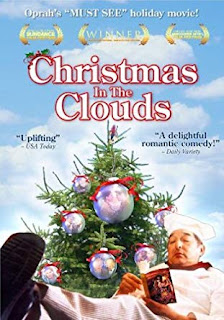 Modern romantic comedies are hard to do well without either deconstructing the format or tossing in elements from contrasting genres. Christmas in the Clouds takes neither of these paths - at its core, it's just a romcom. It's fundamentally absurd, funny without being hilarious, and almost too sweet.

But I'll be damned if it wasn't charming. This one works.

It helps that it's set a long way from the typical locations these movies play out in. It's also featuring a very different cast: with only a couple exceptions, every character (and actor) is a Native American.

The movie's two leads are Ray and Tina. Ray manages a ski resort owned by his tribe. He's expecting an anonymous reviewer from an influential guidebook to stay over Christmas and write up the resort. When a woman (Tina) shows up traveling alone from New York, his staff assumes they've identified the guide. They give her the best room and bend over backward to make her stay comfortable.

Tina, of course, has nothing to do with the guidebook, though she's trying to remain anonymous in another way. She's been corresponding with a pen pal who lives on the reservation. Both she and her pen pal lost a spouse the year before, and they feel like they have a connection. But she doesn't want to seem like a stalker, so she uses her Italian father's last name rather than the Native name she'd been corresponding under.

When she meets Ray, she believes she's found who she's looking for, despite the fact his first name doesn't match up. He seems eager to spend time with her, leading her to suspect that he knows who she is. In reality, she's been writing to Ray's father, Joe, who'd assumed Tina was closer to his age.

Aside from the twist of having double-blind secrets, the plot progresses in a relatively formulaic manner. The two leads spend some time together, fall in love, and hook up. Then, of course, a series of misunderstandings splits them up and leaves them heartbroken.

In the middle of all this, Joe and an old man staying by himself at the resort (i.e., the actual agent from the guidebook) go to a bingo game. The other guy wins a truck Joe had been wanting the whole movie, then they both get lost in a Christmas Eve blizzard. This becomes yet another impediment to Ray reconciling with Tina, though it does finally reveal what had been going on.

The movie ends with a fairly ingenious twist on the airport reconciliation trope, and - of course - with the requisite happy-ever-after conclusion.

Like I said, the story's paint-by-numbers, but that's almost always the case with this genre. Fortunately, the movie is greatly elevated by the details and side characters. The best of these is a chef, played by Graham Greene. He's a vegetarian deeply concerned with animal rights, and his scenes are hilarious. There's also a side-plot involving a lost pet mouse with a feather glued to his head and a recurring gag about a bad "Indian-themed" romance novel: both of these are clever and entertaining.

The movie's not without flaws. There are a few slow bits, particularly when it tries ratcheting the tension a little too high around Ray's missing father. Most of the film is light, so the forced drama doesn't quite work. In addition, it's worth noting the price of being a good romcom that conforms to the genre's conventions is it shares some of the genre's weaknesses. But between the movie's sincere love for its characters and genre and some extremely clever twists, this just ultimately succeeds where the vast majority of romantic comedies fail.

I want to be careful about overselling this. It's not in what I'd consider the "top tier" of modern romcoms - that's reserved for movies like When Harry Met Sally, Shaun of the Dead, Enchanted, Love Actually, and The Big Sick. But - like I alluded to at the start - every one of those movies is either subverting normal conventions, pulling in elements from contrasting genres, or both. In some ways, it's harder to do this genre justice playing by the rules.

Because of this, if you enjoy romantic comedies, you should do yourself a favor and track this down. It's a lot of fun and one of the best Christmas romcoms out there.
00's Comedy Erin Snyder Highly Recommended Movie Romance