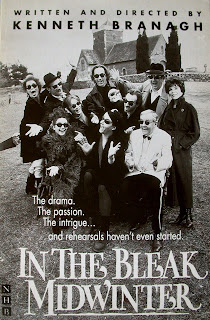 There are many Christmas movies about families, and many about found families. This delightful black-and-white dramedy from Kenneth Branagh shows that the bonds between the members of a theater company are every bit as dysfunctional and poignant as any other family, if a bit more dramatic.

This is a movie that rewards close attention. It’s absolutely hilarious, but many of the jokes, and nearly all of the character beats, are played so straight and subtle that you’ll miss important details if you’re trusting the movie to telegraph when something is funny.

It also rewards some familiarity with theater people and their habits, although I think it would be enjoyable even without that context. It has a lot in common with the 2003 Canadian television show Slings and Arrows - I suspect this film was an inspiration for that series.

The movie follows Joe, an unemployed actor nearing the end of his rope. He talks his agent into helping him bankroll a passion project: an experimental Christmas season production of Hamlet, set in a church in his hometown that’s in danger of being demolished.

After an absurd series of auditions featuring only those actors willing to do a collaborative production of Hamlet for no money on short notice, Joe has his cast, consisting of the bitter, the misfits, the desperate, the idealistic, and the all of the above. Joe’s loopy designer and his sister meet them at the church in the appropriately named town of Hope, and the production gets underway.

As the cast struggle to both work and live together, they also learn about each other. They all struggle with families, both estranged and difficult, prejudices, bad choices, and insecurities. None of them are exactly successful in their chosen career. Eventually, of course, they are able to work through their differences in service of the play and begin to support and care about each other.

The characters all tread that balance between over-the-top and grounded that is so familiar to artists. All the characters also have parallels (some subtle, some less so) with their onstage parts. Joe (Hamlet) is struggling with the purpose of his life. Nina (Ophelia) can’t face reality because it has been too cruel to her. Henry (Claudius) is bitter and unhappy with the choices he’s made. Terry (Gertrude) puts on a good act, but deeply regrets his bad relationship with his son. Tom (Laertes) is so method he’s incapable of being himself.

The play is almost derailed at the last minute by a once-in-a-lifetime job opportunity for Joe, but of course it still goes forward, bringing the cast and the town of Hope a thrilling, if unconventional, theatrical experience. By the end, romance is blooming, some careers are launching while others are at least saved for another day, and reunions are had all around.

The plot twists in this are telegraphed a mile off, but they’re handled extremely well. We close on a Christmas scene of triumph and hope, where a group of people came together to create something special in defiance of the bleak midwinter.

We enjoyed this a lot; it’s seasonal without being schmaltzy and a lot of fun. If you’re a fan of theater, do yourself a favor and put this on your holiday watch list.
90's Comedy Dramedy Lindsay Movie