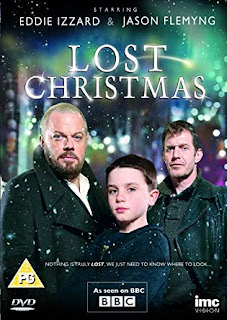 Lost Christmas was a made-for-TV holiday movie, but because it was made in England, it's actually pretty good. "Pretty good" may be underselling it: this is, in many ways, a fantastic film, though there is a bit of a catch. I'll get into that a bit, but first...

This is one of those movies where spoilers do make a difference, and it's worth seeing, assuming you enjoy this sort of thing. It's a melancholy fairy tale exploring cycles of alienation and guilt before setting things right. Imagine a low-budget urban fantasy reimagining of It's a Wonderful Life and you'll have some sense of what you're in for. If that sounds good, by all means stop reading now and go stream it.

The story centers around two characters. The first is an orphaned boy called Goose living with his grandmother suffering from Alzheimer's. His parents died in a car crash the year before, which was caused indirectly by Goose. Since then, the boy's become a petty thief.

The other central character, called "Anthony," appears out of nowhere with strange powers but no memory of his own past. Anthony seems to have the ability to shift objects around, teleporting them from one place to another in a sort of advanced sleight of hand. In addition, he has a psychic connection to lost things: if he touches the hand of another character, he gets a vision of their past centered around an object they value that's missing. He's played by Eddie Izzard, who manages to pack a lot of emotion into every line. She's not the only reason this movie works, but she deserves a lot of credit for selling this.

There are several other characters tied together by connections to both missing objects and missing people. Goose's father was a firefighter, and his absence had a domino effect that led to further tragedy.

The movie follows Goose and Anthony as they follow a trail of lost objects in a quest to ostensibly find Goose's missing dog. Naturally, the stakes wind up significantly higher by the time Anthony recovers his memories and we get the obligatory Christmas miracle.

I've been trying to keep things vague up until now, but we're hitting on the point of no return. Last chance: if you want to avoid spoilers, jump off now.

To Lost Christmas's credit, it sidesteps the obvious explanations. Anthony isn't an angel, nor is he Santa Claus. He's the time-displaced spirit of Goose sent back after a life of crime. In addition, while the movie doesn't state it outright, it strongly implies the cosmic force empowering him is Shiva, which is a nice change of pace in this genre.

About half the magic Anthony's done has been, well, tricks he'd learned over a life split between theft and street magic. The other half... well, that's my one big nitpick for this otherwise great movie.

It's not quite a plot hole - it just means he has more supernatural assistance than is explained by his origin story. But with a few small adjustments, his origin would have been sufficient, and I think the twist would have been far more effective. Ultimately, it feels it feels as though the ending was tacked on, rather than organically coming full circle.

But while I found aspects of the reveal a tad disappointing, the movie as a whole was enchanting. The bleak, empty setting mixed with subtle magical realism was spellbinding. It's fairy tale melodrama done right: this thing is a master class on making fantasy on a shoestring budget.

It's also another data point for our theory that Britain simply makes better Christmas movies than we do.
[Note: Pronouns for Eddie Izzard updated December 2020 to reflect her preference].
2011 Drama Erin Snyder Fantasy Highly Recommended Movie