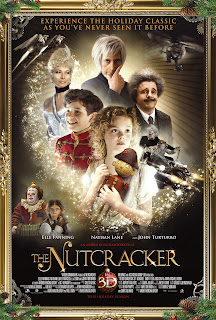 So, turns out this year's Nutcracker and the Four Realms wasn't as original as I'd thought. Eight years ago, someone else had the idea of flushing 80 million dollars down the toilet trying to merge Nutcracker with Narnia.

According to Box Office Mojo, The Nutcracker in 3D (a.k.a. Nutcracker: The Untold Story) was budgeted at an estimated 90 million dollars. Its total US box office was a little less than two hundred thousand dollars, and its worldwide total was just over 16 million. It's currently sitting on a Freshness rating of zero percent on Rotten Tomatoes. Somehow, both that and its box office total feel oddly high to me.

The movie is, in all senses of the word, a fiasco, which I honestly mean as a compliment. Somewhere around the time the Nazi Rat King (John Turturro wearing some astonishingly weird prosthetics) finished his jazz solo by electrocuting his pet shark, I realized I was watching something gloriously bad.

I'm getting ahead of myself. The movie starts by introducing us to Mary (Elle Fanning), who lives in what I think is supposed to be 1920's Austria or Germany. Her parents are somewhat neglectful, but her kindly uncle Albert (played by Nathan Lane) makes up for their lack of interest. Albert encourages her and her brother to use their imagination. And also to understand relatively, because "Uncle Albert" appears to be Albert Einstein. He's got a song about relativity set to Tchaikovsky's music. All the songs are set to Tchaikovsky's music, though in some cases the music's transformed (such as the Rat King's jazz number).

[Editorial side note from Lindsay: I can't let this pass without mentioning just how terrible these lyrics are. The movie's credited to Tim Rice, who's usually way better than this. I would only accept the crimes against music perpetrated here if written by a second-grade teacher for their class to sing. And even then I would call it awkward and sloppy.]

Also, her parents know Freud, but I don't believe he appears (though he's credited on IMDB, so maybe there's an extended version or something). If there is, I want to watch it.

Albert gives the kids a doll house with a bunch of wind-up toys inside, in addition to the nutcracker, which Mary's brother immediately breaks. Of course, Albert quickly repairs it, Mary takes it upstairs, and that night it enlists her help in using her imagination to become animated and to grow somewhat larger. He takes her downstairs to show her the Christmas tree has grown to a massive size, and the toys and decorations are all real.

They then ascend the giant tree, dance with some CG snow fairies, use the head fairy's magic to turn the Nutcracker human again, and eventually reach the top. The Nutcracker (nicknamed "NC")  points out his city in the distance. We then cut to a superfluous flashback showing the invasion of the rats, and...

They're Nazis. They're basically wearing WWI German uniforms, but their propaganda looks like Nazi propaganda, and their symbols are all stylized to look like Nazi imagery. If they were anymore Nazi-ish, they'd call themselves "alt-rats."

Once we're through the flashback, the Rat King learns the Nutcracker's human and gets his mother to magically turn him into a doll again. Also, he sends some mecha-rat-dogs to use the buzz saws in their mouths to cut down the Christmas tree.

I'll explain some of that later.

Mary wakes up in her bed and runs downstairs to look for the Nutcracker in the ruins of their living room. She finds the Nutcracker, but her parents find her and want answers about the fallen tree. She can't provide them, so naturally, they're pissed. The next day Albert comes to visit, and there's an extended sequence about a pebble that does nothing to progress the story.

That night, Mary reanimates the Nutcracker off camera, and they head back down to enlist the other toys, only to find the Rat King and his soldiers waiting. Mary's brother briefly signs on with the Rat King, and most of the toys are captured. Mary finds a toy monkey, and they go to the attic and use a mirror to teleport into the Rat King's dystopian city, and...

And I swear to God, I didn't skip anything. They didn't set up the mirror in an earlier scene or anything - I guess they just assume everyone's familiar with Alice Through the Looking Glass.

Okay, the city run by rats is covered by a cloud of smoke which is created at a massive metal factory where toys are incinerated in order to block off the sun. Also, everything here is grey and bleak, there are rat soldiers with bat-inspired rocket packs, motorcycles outfitted with machine guns, and... did I mention the Nazi stuff?

Yeah, well, did I mention this was a kid's movie?

The rest of the movie is sort of a hodgepodge of plot holes, continuity errors, and weird stuff culminating in a fight with the Rat King inside a steampunk flying contraption. Everyone lives, even the Rat King (he transforms into an actual rat and escapes with his mother), and Mary's sent back to the waking world by Glinda the Good Witch the Snow Fairy. And of course, Albert shows up with his new neighbor, a boy identical to NC whose initials are NC. He... yeah, he just tells her to call him NC, because subtlety died and was incinerated to generate a cloud to blot out the sun.

And if all of that sounds insane to you, rest assured I barely touched on the depths of weirdness permeating every moment of this production. I didn't talk about how the Nutcracker was a moving CG doll most of the time, or how there were CG rats, or how the monkey was a man in a suit with a digital mouth...

But as weird as the CG is, it's nothing to the tone. This is Narnia crossed with Brazil re-imagined as a musical for pre-teens. Some of the rat designs are the stuff of nightmares, while the lyrics to the songs are juvenile.

I should note that, setting aside the movie they're presented in, I like the steampunk designs quite a bit. The mechanical rat-dogs are neat, and the motorcycles look like something Hydra would design. All that stuff is cool - it just doesn't belong in a kid's movie.

This thing's a mess on every level, and I loved watching it disintegrate. This is the sort of movie you should watch with friends and get to know before MST3K gets around to it in a few years. It's hilariously awful - so bad it's good to the point I feel dumb for bothering to point it out.

And if you're curious how something like this gets made, there's a helpful 54-minute making-of feature on the DVD (and you bet your Christmas we watched the whole thing). This thing was decades in the making, and clearly someone thought it had the potential to be the next Lion, the Witch, and the Wardrobe. But audiences showed no interest in the concept, and the bizarre premise resulted in a finished product that went off the rails.

I guess this means we'll be getting another of these around 2026. Can't wait.
Erin Snyder Fantasy Movie Musical So Bad It's Good