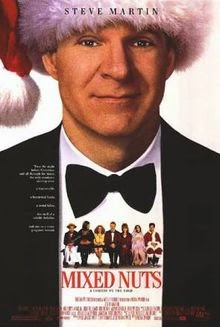 Mixed Nuts is a mid-90's comedy starring Steve Martin ostensibly about a non-profit suicide-prevention line on Christmas Eve. I say "ostensibly" because the premise isn't actually all that central to the movie. It's somewhat baffling, actually: they set up the idea of a suicide prevention line, use it to deliver a handful of jokes, then more or less abandon the concept halfway through. It's not "officially" dropped - there's no plot reason for it to be removed; it's more like they ran out of material.

Instead, we focus on a series of subplots revolving around the characters. First, there's Steve Martin's crumbling life. His girlfriend dumps him, he's in danger of losing the office location (and by extension, the non-profit), and he starts doubting his ability to help people. There's no drama here: it's mostly an excuse for him to do his usual shtick.

Next, there's Rita Wilson, playing a fairly boring love interest for Martin. There's a brief love triangle with her, Martin, and Adam Sandler. Which brings up the next problem with this movie: Adam Sandler is in it. He plays the same character he played in every movie he was in that decade: a loud, high pitched singing idiot. You know, himself.

Next, there's a couple having a baby, who are kind of the plot. They're having marital problems, mainly due to a lack of money. The latter half of the movie is preoccupied with them accidentally killing the building's super and enlisting the others' help in hiding/disposing of the body. When the baby is delivered unexpectedly at midnight on Christmas Eve, the situation naturally deteriorates into a nativity scene.

There's also a cruel middle-aged woman who works at the non-profit and gets stuck in the elevator, a transvestite played by Liev Schreiber who hits on Steve Martin, and a few other minor characters not worth mentioning. Oh, and Jon Stewart has a bit part as a rollerblading yuppie.

The movie has a decent number of humorous moments, but not enough to make it particularly memorable. Ultimately, this feels like a long episode of a decent sitcom. Sitting through it isn't awful, but it's certainly not something you should seek out.

One more thing - apparently, this is a remake of a French film from the 80's. We'll try and track that down eventually, but no promises: it seems to be difficult to find.
90's Comedy Erin Snyder Movie