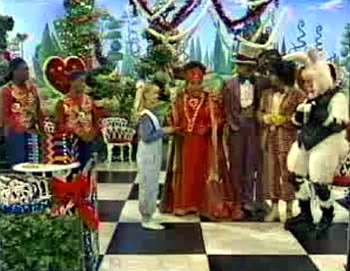 So I discovered this hidden, uh, 'gem' the way you do these days: by following a series of clicks down a black hole of the internet and reading about Disney Acid Sequences. And I was skimming the list of examples, and I said, wait. Adventures in Wonderland. That sounds oddly familiar…

A little YouTube later and I established that I not only had seen this crime against good aesthetics when it came out, but that there was a Christmas Episode.

This show is… weird. It’s weird on a lot of levels. Not just the super early-90’s look to Alice and the others, although that’s a lot of it (The White Rabbit zips around on black rollerblades and Tweedledee and Tweedledum dress like break-dancers). It’s got a sort of tell-it-super-straight vibe that I associate with television aimed at the youngest of the young, but the word usage and speed of the plot implies an audience of at least 6-8.

Okay, so the episode starts with Alice whining about how it’ll be a rotten Christmas if she doesn't get new skis. Skis? Sure, okay. Then she walks through the mirror to bring cards to her friends in Wonderland and we’re treated to a lot of ugly compositing and a Christmas-ish version of the theme song. Once there, the audience learns that the Wonderlanders are preparing for their traditional Christmas activities: like hanging produce from the walls and going door-to-door kazooing. Alice expresses surprise at their traditions and explains hers. The Queen (this character is a sort of kinder and gentler mashup of the Red Queen and the Queen of Hearts) is irritated that Alice’s traditions sound nicer than theirs, and soon the Rabbit leads all the other characters in a series of madcap schemes to bring the Queen snow for Christmas.

And there are songs. Hoo boy, are there songs. The lyrics are occasionally not terrible, although there’s a whole little ditty about how they ‘love to snow the Queen’ that sounds like a really dirty joke that didn't land.

The style (live action with insane costumes) takes a side trip to claymation for a story told by the Caterpillar, apparently done by Will Vinton productions. (Hey, I like those guys!)

Of course, it snows at the end, through helping each other Alice and co. re-establish that Christmas is about friends and family instead of gifts, and there’s more singing. I’m left feeling… odd.

I mean, yeah, it’s bad. But, I don’t know, it’s as though the actors were really trying, and occasionally they pull some actual humor or pathos out of extremely thin material. The acting is extraordinarily broad, to the point that, for me, it almost circles the globe back into interesting from the wrong side. I could see being weirdly fascinated by this if one were 8. The costumes are impressive, to the point that they won an Emmy for them. They also split an Emmy for writing with Sesame Street. There’s something here. Not much, but something strange.

Still, I’d say only Alice completists or connoisseurs of surrealist children’s TV need to track this one down.
90's Episode Fantasy Lindsay Musical