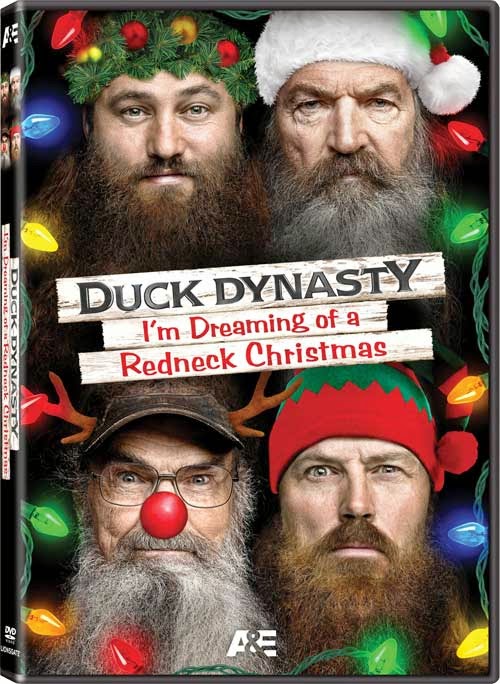 The best thing I can say about this episode is that it isn't, strictly speaking, unwatchable, and even then the statement is made at what I consider my most generous of moods. But it is, of course, Christmas, and at Christmas we should be charitable and giving. So I will give the Robertsons this: their Christmas episode was not literally unwatchable. It was merely crappy. Idiotic. And stupid.

I should most likely add this represents my first real experience watching the Robertson clan, unless you count the Youtube video that got Phil Robertson suspended from A&E for a few weeks. The experience was not quite what I'd expected.

The only thing I really understood about the series Duck Dynasty was that it was a reality show staring a family of millionaires bearing an odd resemblance to ZZ Top who'd made their fortune producing duck calls. As it turned out, I was slightly off: this wasn't remotely a reality show.

It pretended to be a reality show, but the situations were contrived, the characters were exaggerated, and the events were blatantly plotted. Bad writing is not sufficient to convince anyone a scripted episode is anything else, and the fact that the Robertsons are horrible actors doesn't help matters.

Ultimately, it felt like more like a skit show masquerading as Reality TV. Aspects were reminiscent of Ace of Cakes, save that Ace of Cakes offered interesting characters and funny situations. Duck Dynasty, on the other hand, functioned as a sort of infomercial for the Robertsons' duck hunting paraphernalia company.

The fact it seems to have been overwhelmingly successful fills me with despair for the future of the human race.

As you'd expect, this episode revolves around the Robertson clan getting ready to celebrate Christmas. There are a series of improbable mishaps, starting with a not-so-subtly edited sequence about one of them climbing onto scaffolding to put a star on a warehouse Christmas tree. Do I even need to tell you it ends with the tree toppling over in traditional sitcom fashion?

This is something of a running theme. If lights are being hung, the bulbs are breaking. If there are ornaments, they're being dropped constantly. Sounds of them shattering are obviously added in post-production.

All of this is outright believable compared with the sequence where a character goes to distribute gifts to kids at a local church. He sends his uncle to pick up some stuff they can give away from the office, and he shows up with a trash bag full of office supplies. Peeling back the layers on the absurdity is a tricky proposition, but I'll do my best. Are we really supposed to believe the CEO trusted his idiot uncle to pick out gifts? Are we actually expected to buy that this guy's so far gone from reality he'd think a tape dispenser is a good gift for an eight-year-old? And, while we're on the subject, what was he supposed to bring from the office?

Nothing is explained: in the tradition of bad comedy, we're expected to swallow the premise without question and laugh at the zany characters. Perhaps this is all easier to accept after downing a six-pack. The possibility I may have been the first adult to voluntarily watch an episode of Duck Dynasty sober strikes me as a real possibility.

All of this is just a side note to what the real message of the episode is, which is that Christmas is about family. Or maybe Jesus. Or, I don't know, a comically over-complicated light display that only fully works when all the characters have gone inside.

Yeah, they'll steal from damn near anything.

For all my complaints, the utter surreality of a show pretending to be reality television without putting in the effort to conceal that pretense made the experience fascinating in an academic sense, which is why I'm not rating it harsher.

However, this is not for holiday amateurs. I'm not sure what this would do to someone who hasn't built up a resistance to awful holiday programming, so I'd advice most of you to stay away.
2012 Comedy Episode Erin Snyder Reality Religious Sucks