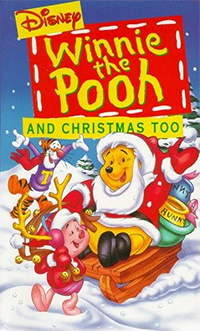 Try and stay with me for a minute: this one gets a little confusing.

Technically, we watched the 2002 direct-to-DVD movie, A Very Merry Pooh Year. However, after a brief introduction, the first half of that movie is a slightly edited version of the 1991 special, "Winnie the Pooh and Christmas Too," which is the finale of the series The New Adventures of Winnie the Pooh. If it weren't for the intro, these would just be two desperate specials featuring the same characters, but - for some reason - they must have thought it would work better as an integrated feature.

For the most part, they were hilariously wrong. More on that in a moment. First, let's back up and say a few words about The New Adventures of Winnie the Pooh. The series ran from 1988 to 1991; I was born in 1979, so I was certainly watching Saturday morning cartoons when it was around. When I wasn't able to find something more violent on TV, I'd occasionally turn it on. I remember liking it quite a bit, though I can't really remember much more.

Needless to say, most shows from that era don't hold up, so my expectations weren't exactly high. I was pleasantly surprised to find the older segment, "Winnie the Pooh and Christmas Too," was essentially what I remembered. The newer half was more in line with what I expected.

"Winnie the Pooh and Christmas Too" isn't an especially original concept, revolving around some shenanigans relating to a letter they're trying to send to Santa via a windy day. There are a surprising number of clever visual gags, along with some equally clever twists. Nothing especially shocking, but it's pretty clear the writers were putting in some effort.

The finale is relatively straightforward, though they exercise unusual restraint and skip any supernatural elements in the resolution. In fact, when Christopher Robin shows up with a sack of gifts "left by Santa" I raised an eyebrow... and I'm pretty sure that was what they intended.

The only two aspects that were changed for this release were - astonishingly - good changes. First, they recolored Rabbit to match the original look. Second, they re-dubbed Christopher Robin, so he'd match the voice actor in the second half. Normally, re-dubbing is nothing to celebrate, but in this case it meant switching from an American to British accent. I don't think the importance of a British Christopher Robin can be overstated, so kudos, Disney.

It's not genius, but the special is practically the embodiment of charm. It's a shame they couldn't figure out how to recapture any of that magic a decade later.

It's actually difficult to pick out exactly what makes the rest of the movie feel so lifeless. There are lots of details: the animation deviates further from that used in The Many Adventures of Winnie the Pooh (New Adventures offered a relatively good facsimile), the jokes aren't as strong, the dialogue doesn't snap, and the story is less interesting... but there's something more primal missing.

These elements aren't well realized in "A Very Merry Pooh Year," but they're not egregiously bad. The animation is fine. There are still at least a few good jokes, just nowhere near as many. The dialogue wasn't out of character or anything. And the premise is actually kind of clever.

But while the '91 special was more than the sum of its parts, the sequel is less. While the first brought a smile to my face, the second dragged.

The story focused on Pooh, Piglet, Eeyore, and Tigger making New Year's resolutions to try and change so Rabbit won't move out of the Hundred Acre Wood. Each gives up an integral part of their character - Pooh swears off honey, Eeyore agrees to be happy, Piglet promises to be brave, while Tigger takes an oath not to bounce (yeah, I know: again).

The clever twist is that, robbed of these traits, they take on an element of one of the other characters. Tigger and Piglet switch personalities, as do Eeyore and Pooh. It's a fun idea that was better executed than you might expect, but... the whole thing just felt soulless. The writing wasn't awful, but it wasn't inspired, either.

I'm going to have to track down some other episodes of The New Adventures of Winnie the Pooh: that section was pretty good. I almost feel like I owe a debt of gratitude to the newer section, as well: in its mediocrity, it highlighted just how good the older stuff was.
00's 90's Comedy Erin Snyder Fantasy Special