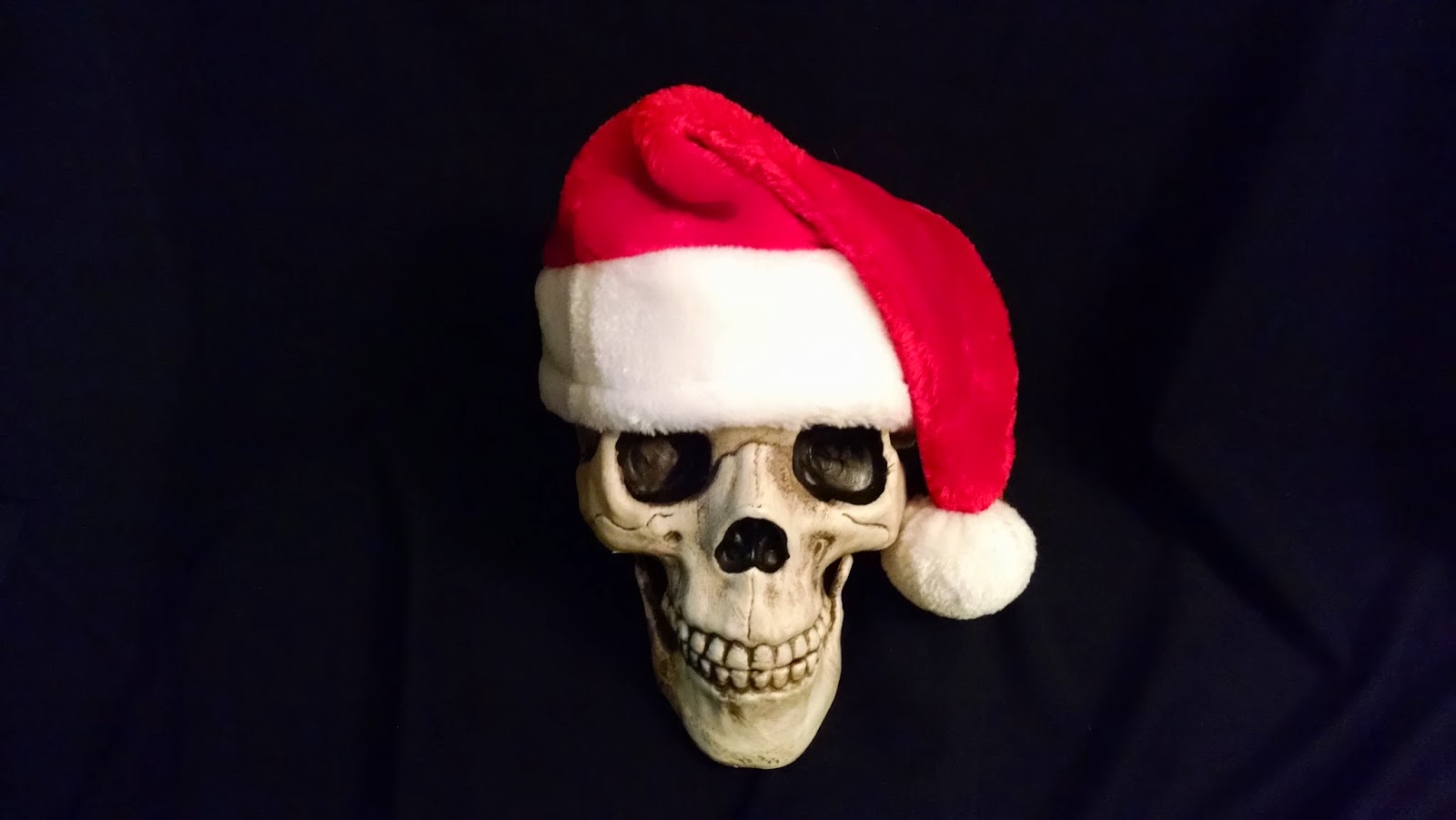 Other gift guides start from the assumption that there's a brilliant gift out there waiting for you to find, a gift that will convey a sense of emotional gravitas or communicate a message of gratitude or love, or simply convey an expression of goodwill around the holidays. These guides try to give you ideas in the hopes that they'll introduce you to something you haven't thought of or jog your memory into recalling that perfect gift idea.

Here at Mainlining Christmas, our starting assumption is that if you're trying to find an interesting, thoughtful gift at a reasonable price for an adult, you're pretty much screwed. Sure, at one time there were gift ideas ripe for the picking, but that ship has sailed, been retired from active service, was forced to go out on one last adventure in order to rescue a bunch of orphans shipwrecked on Christmas Eve, then sunk off the coast of Gibraltar in a storm. Presumably the metaphorical orphans were then rescued by Batman - he does have a Christmas movie, after all.

The problem is that the world moves on, and as it does so, it takes its junk with it. Since we can't offer any actual ideas for presents, we thought we'd dig through the corpses of classic Christmas gifts that were once mainstays but have since become obsolete relics of bygone eras.

How will this help you? Well, our hope is that this exercise will demonstrate just how bleak the outlook is, leading you to give up on finding that great present and resign yourself to picking up a handful of gift certificates. Incidentally, a gift certificate is not, technically speaking, a gift, but rather a codified apology for failing to find a gift. This should save you hours of frustration, as well as a trip to the mall at the busiest, most intolerable time of the year.

With that in mind, we hope you'll keep reading for our seance of the Ghosts of Christmas Presents Past.


Calendars
For decades untold, the calendar was the go-to gift for anyone we knew well enough to guess their preference for pictures of kittens, firefighters, or Frank Frazetta artwork, but not well enough to realize they already owned a half dozen calendars for the following year. Even so, there was always the hope you'd find the perfect calendar if only you went early enough. Due to demand, styles would sell out early, leaving only a selection of landscapes and Van Gogh paintings, both of which would still be available come January for a dollar or less.

Calendars were essential to survival in the wild cities and schools of years past, but the best calendars were so much more. Once their time had elapsed, a single cut along the spine left the owner with a 12 pack of miniature posters to hang around their house. For these reasons and more, the calendar was the perfect gift.

Until we got cell phones. And email accounts with built-in calendars. And cell phones capable of syncing with our email calendars which can be set up with alarms to go off every December to remind us to never waste our money on a calendar ever again. Calendars certainly aren't the only things which have been rendered utterly superfluous by technology, but they do have the distinction of being the ones we miss the least. People are nostalgic for newspapers, for Christ's sake, but when is the last time you heard anyone bemoan the fact the calendar companies were closing down?

Remember when there were stores that sold nothing but calendars in the mall? Remember when we'd all get three or four or ten calendars every Christmas, because no one knew what else to buy us? Of course you don't. And a year after the last holdout calendars vanish from that rack you always walk by in Barnes & Noble, you'll have forgotten these ever existed at all.


Books
Books have gone from a thoughtful fallback gift to something that will almost certainly be extraneous matter in your friends' and coworkers' apartments, and not just because a quarter of them have given up reading altogether. No, the larger issue is that e-books are gradually taking over. Unless you know for certain that a friend still prefers print because they live in a cave and like sniffing the pages, you risk buying someone an ugly paperweight, which they don't even need since they've given up on paper. All of this is assuming you happen to pick out something they haven't read and would actually like, which is itself pretty unlikely.

You could, of course, still buy someone an e-book as a gift. For those of you who have retained too much of your soul to have even contemplate this as a possibility, allow me to explain. Gifting an e-book is a lot like buying someone a gift card, minus the sentimental connection attached to the physical piece of rectangular plastic.


Magazine Subscription
On the hierarchy of anachronistic gift ideas, only the calendar is less relevant than the magazine subscription, and even then it's a close race.

Magazines aren't just obsolete as Christmas presents: they're obsolete in general. This isn't a new phenomenon, either. By the late nineties, paying money for outdated webpages in print form was beginning to feel antiquated. By the time the new millennium rolled around, magazines were only useful for reading in the waiting room of the dentist's office. Then we all got smartphones, and it became increasingly unclear why dentists still bother.

It's 2014, and no one needs or wants a magazine subscription.

CDs
You know what compact discs are? They're digital music. You know what everyone does with them? They rip them to MP3 and upload them to their iPhones so they have something to listen to while browsing Facebook while they wait for the dentist to see them. Or, more often than not, they don't bother. Because if it's a song they actually wanted, they already downloaded it, legally or otherwise.

This is assuming your friends still maintain a music collection. A lot of people have shifted to streaming services, rendering the situation moot.

DVDs
This one is a relatively new addition. Just a few years ago, it was perfectly reasonable to go to Best Buy or Target, root through their bargain DVD bins, and pick up something you knew someone would appreciate. It was a low-cost way to find a solid Christmas gift, the last refuge after calendars, books, magazines, and CDs had become obsolete.

Then everyone got Netflix. Now, half of those movies are available at the press of a button. And the ones that aren't..,. well... who cares? They'll have something just as good in the same genre. Besides, you won't even have to go through the hassle of getting up, finding the DVD on the shelf, prying open the case, opening the DVD player, realizing there's already a disc in there, looking around for that DVD's case, giving up, placing the removed DVD on your living room counter beside two dozen similar discs covered in a thin layer of dust, placing the selected DVD in the player, then making your way back to the warm embrace of your couch.

Kids today will never realize the hardships we went through back in the old days.


Everything Else
It's impossible to account for every kind of gift out there. Nah - I'm just kidding. When Christmas is concerned, nothing is impossible. We've created a useful flow chart to help you analyze whether any gift is right or wrong for any potential recipient. Here you go: 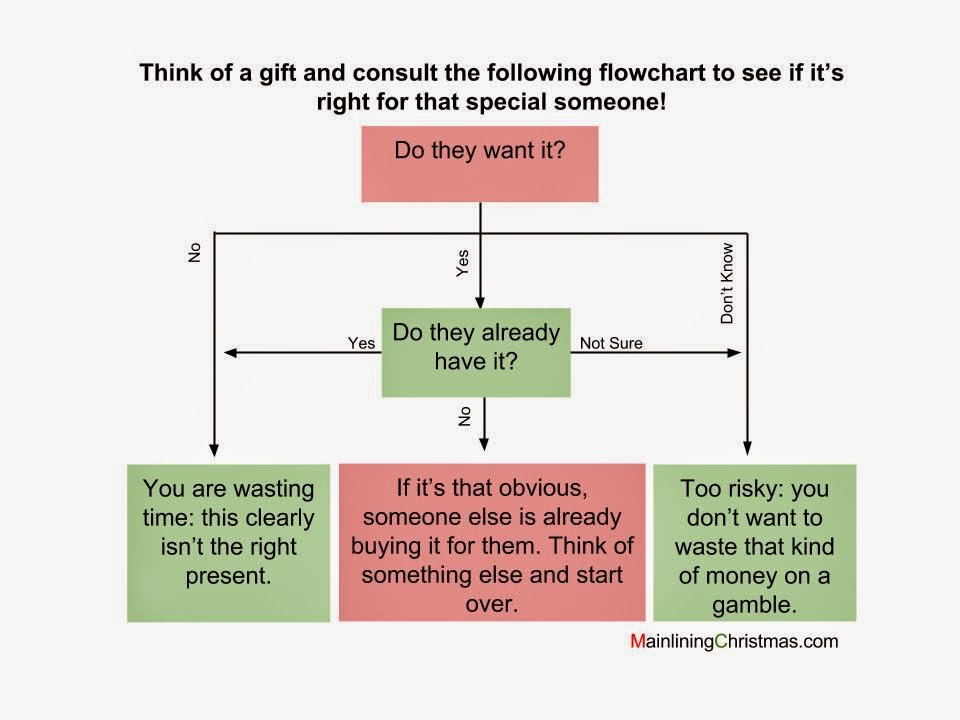 So then. How do you find a gift that someone will like that they don't have? Ha! You kidder. That is literally impossible.


Conclusion
We hope our exhaustive look at gift ideas has helped you realize that there is no hope this holiday season, and that you're better off just buying a gift certificate to whatever wine shop or cheese emporium your friends frequent.