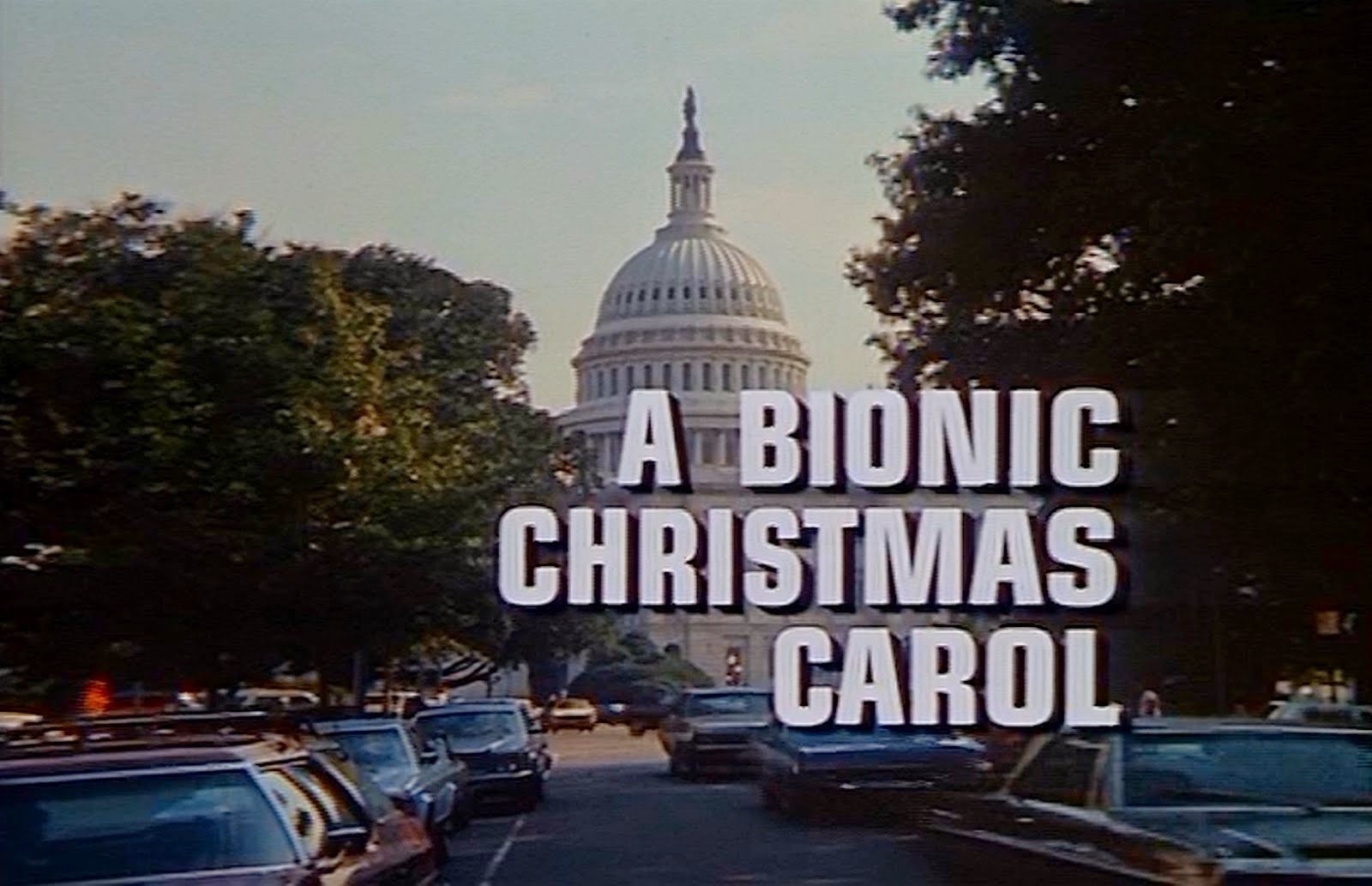 Let's say you're a TV producer in the 1970's, and you're holding the rights to a science-fiction/spy thriller novel you want to adapt for television. Do you go with the original title of the work, "Cyborg," or do you name it "The Six Million Dollar Man?"

This episode opens the day before Christmas. Steve Austin, the Cyborg Six Million Dollar Man, is sent on a mission to investigate possible sabotage at a company contracted to develop gear necessary for a mission to Mars.

Just so no one gets any ideas, no on goes to Mars in this episode. That probably would have been cool.

The company's problems, surprisingly, aren't due to sabotage. Instead, they're caused by the owner's adherence to the absolute minimums specified by the contract.

Also, he's Scrooge. His name is changed to Budge, but he's clearly Scrooge. He even lives in a mansion built to resemble every version of Scrooge's mansion you've ever seen. And his chauffeur/nephew is named Bob Crandall. I'm not even going to justify that "Budge" nonsense: I'm calling him Scrooge from here on out.

There's back story, but I'm not going to bother: Cratchit (I mean Crandall - NO! SCREW IT! CRATCHIT) is effectively owned by Scrooge, and Scrooge keeps Cratchit (and by extension his family) in poverty as punishment. Technically, Scrooge isn't breaking any laws by producing defective equipment for the US government, so Steve Austin can't do a damn thing. Around this time, Scrooge OD's on his meds and falls off a banister.

Austin is conveniently around to kick in the door, run over, and catch him. Interestingly, if he had not been there, Scrooge would almost certainly have died, and his company would have almost certainly passed to his next of kin, Cratchit, who almost certainly would have changed the organization's practice to be good instead of evil. Scrooge Corp would then have been out of business in a few years, because everyone knows the invisible hand of the market will crush anything that doesn't do the Devil's bidding. But the government would have gotten working Mars equipment first, thus making the mission a success.

What I'm saying is that the only person working for the US government who could possibly screw this up is Steve Austin, since he's the only one with the power to save the villain. Other than the Bionic Woman, of course, but I assume she'd have had enough sense to let the bastard die.

For some reason, Austin takes this as an invitation to pull a Dickensian con based on A Christmas Carol. However, instead of three ghosts, he dresses up like Santa Claus and takes Scrooge caroling. He then brings him to his nephew's house, sneaks over to the window, then opens it so Scrooge to spy on Cratchit and his wife conveniently talking about him. Since this clearly wasn't creepy enough, Austin super-jumps him up to the second floor, so he can spy on Cratchit's children, also conveniently talking about him.

It's worth noting that Austin opens a window both times and continues to converse quietly with Scrooge. There is absolutely no logical reason that no one notices they're there.

Scrooge buys the vision and decides to keep Christmas in his heart or something. He mends his ways, buys his family presents, sends his workers home, and agrees to pay the medical bills of someone who was injured on the job earlier in the episode.

If you've never seen an episode of The Six Million Dollar Man, you might be unaware of just how phenomenal the special effects were for the era. If they want to show Steve Austin jumping, they show him getting ready to jump IN SLOW MOTION then cut to him landing a hundred feet away. If he's running at super-speed, they show him running IN SLOW MOTION.

I never realized that they could afford slow motion on TV. How did they even manage this without computers? The mind reals at the brilliance that must have been required to SLOW DOWN THE TAPE to communicate the fact that the character was running really, really fast.

Also, there was a moronic sound effect. Sorry, people who grew up with this: the sounds are objectively crappy. It's better if you accept this and move on.

As a whole, the episode occupies a midpoint between boring and unintentionally hilarious, occasionally hinting at both extremes but never really embracing them. It wasn't awful, but it certainly isn't worth tracking down unless you're interested in it as an artifact. Or, you know, if it was an integral part of your childhood. If so, you have my sympathies. This was even worse than the crap I grew up with in the 80's.
70's Action Episode Erin Snyder Science Fiction Superhero