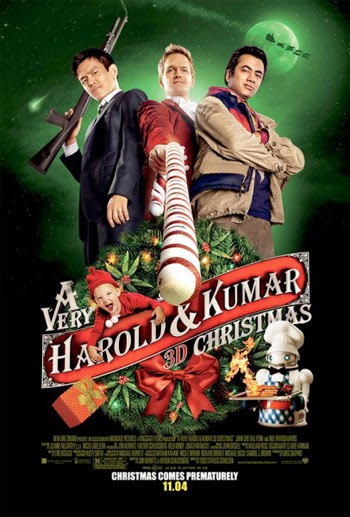 In case there was any question, we saw this on our TV in a mere two dimensions. I can't imagine the effect was sufficiently different in 3D. It was pretty obvious where it was put to use.

This is the third and - to date - the last in the franchise. We've seen the first, which I found to be a relatively clever take on racism. We skipped part two, but it was only a matter of time before we got to the Christmas installment.

If I'd looked this up on Rotten Tomatoes, I'd probably have gone in with higher expectations - for some reason, I was under the impression it was widely despised. Turns out, it's at 68%, a respectable score for a stoner comedy.

I almost want to review this movie in two parts. The difference in quality between the first and second half of the film is startling. The film opens with a series of sequences designed to bring us up to date with where the title characters are in their lives. We're also introduced to some side characters and threads that can be called back later.

I should mention that none of this is interesting, subtle, or remotely funny. There are a lot of cartoonish gags built around the 3D, most of which were about as original as shooting the third installment of a series in the format in order to fuse part 3 and 3D together. The characters, new and old, lacked any subtlety or depth, and the dialogue was tedious. The movie doesn't have much to say on the subject of racism, which is unfortunate given the original.

Then a funny thing happened, both literally and figuratively. After spending the first half of the film tossing out set-up, the movie began to deliver payoffs. It would be an absurd overstatement to say all or even most of these worked, but more than enough were legitimately funny to make the second half entertaining.

The high point was probably NPH, despite the fact "lecherous Neil Patrick Harris" is now as tired a joke as any. They took the joke in some interesting directions, though. They also went into some dark territory with the character. Maybe a little too dark, depending on your tolerance level. Neil's husband, David Burtka, also makes a fantastic appearance.

The movie's last act was funny and - shockingly - somewhat sweet. The movie pulled off a late twist that, despite being another cliche in this kind of movie, I didn't expect.

I found enough to enjoy to just barely make the overall experience a positive one. I'd be remiss in not mentioning that Lindsay's experience was less favorable. While her appraisal of the individual jokes was similar to mine, her final analysis came up negative.

As far as R-rated raunchy Christmas movies go, this doesn't hold a candle to Bad Santa. But if you've already seen that five or six times and you enjoy this style of film, there are worse films out there. If you find it playing on TV and it's already halfway through, even better.
2011 Comedy Erin Snyder Movie