Moonlighting: 'Twas the Episode Before Christmas (1985) 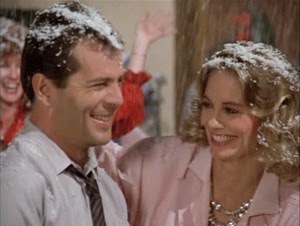 Neither of us had actually, to our recollections, watched an episode of Moonlighting before today. Just to set a baseline. Our reactions: “That was really kind of good. Also dumb in bits, but quite enjoyable.” “Well, now I know why no one believed Bruce Willis would be an action star.” “I guess I see why it was so influential.” “Huh, the first episode was much better.”

We’ve got two Christmas episodes to talk about, and yes, this first one was much better.

It’s a good thing that the Netflix DVD sleeve explained that these characters run a private detective agency, because it is really hard to figure that out from this episode. The episode opens with the plot hook: a random dude gets killed by a bad guy he once testified against, but his wife and child escape. Said wife leaves her baby for safekeeping with no explanation in the apartment of a secretary who works for Maddie (Cybill Shepherd) and David (Bruce Willis). Said secretary brings the baby to work, and the main characters dash about trying to figure out who left a baby like a present under a tree, interspersed with sweet little scenes of Christmas and a happy infant.

It’s a good thing that all the answers fall into their laps, because going by this episode, these characters are terrible detectives. However, the dialogue is snappy and wonderful as advertised, and the fourth-wall breaking is used extremely well. I especially enjoyed the intelligence of the writing, the little references and clever wordplay.

Eventually the bad guys are defeated and the baby returned to his mother. I will believe that the fourth-wall business may have gotten a bit overused by the end of this series, but for a Christmas episode, this was a really nice touch: the characters figure out they’re in a Christmas episode, but one says that it can’t be, there’s no snow. So it begins to snow indoors. And then the camera pulls back, and back, and it’s fake snowing on what looks like the entire production staff and their families, singing The First Noel. The song stretches on in a way that only makes sense if it was intended as a gift to their staff. Complete with shots of bored teens, guys awkwardly lip-syncing and little kids playing with the fake snow. It’s very real, and I really liked it.