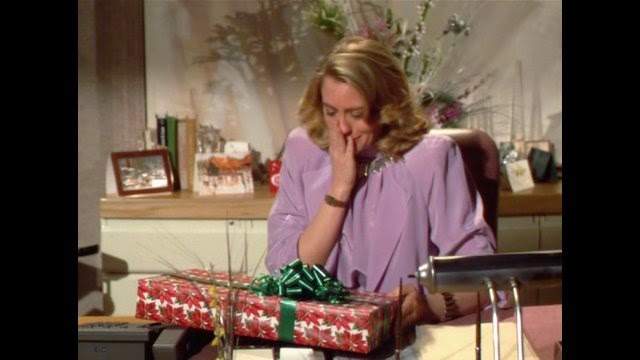 This episode I liked less than the first. One problem, as I see it, is that many shows which attempt to adapt either It’s a Wonderful Life or A Christmas Carol (or sort of mash them up, as this one does) need to bend their characters so far out of shape to do it, that the resolution has no sentiment or weight.

Also, the premise here is really dumb. Maddie needs to keep everyone in the office over what would be their Christmas break to keep a case active. They stage a petty, whiny revolt, and David gives her a moralistic speech of nastiness. Then she learns that her aunt, sick in a nearby hospital, has died before she had time to visit because she’s been so busy. Cue regret, wishes, vague suicidal impulses, and a pudgy angel in a suit.

Maddie gets to see a world in which she didn’t keep the agency open. The lives of the other characters are boring, and the writing attempts to make us believe that we should care, but no. They’re caricatures anyway, so being a different caricature doesn’t really seem to matter. Her life, however, is inescapably worse without the agency, as she is a lonely suicidal drunk.

She manages to wake up from ‘it was all a dream’ in time to head back to the office to receive the condolences of her employees and give them back their vacation.

Now wait a minute. See, the episode was just sort of plodding and dull up to this point, but here’s where it goes down the tubes. Either this case was important to the agency or it wasn’t. If it wasn’t, then why was she making a big deal out of it? But it seemed important earlier. So why can she just cancel it now? All those idiots cheering over getting a couple extra days off will feel pretty dumb when they’re all out of work after New Years if the whole enterprise tips too far into the red.

So while I would have appreciated and accepted a compromise, maybe Maddie finds a way to let some people have some extra time or take work home or otherwise pull the team together and both respect her friends’ feelings and keep the doors open. But instead, shaken by the asshole angel, she folds like a bad hand of cards. And all those Christmas-loving assholes get to go on in their short-sighted little lives.