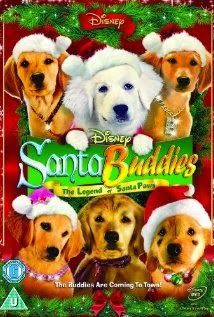 To even begin to entertain a serious discussion about the movie Santa Buddies, we must first explore the greater cinematic universe it inhabits, as well as the origins of that universe. And for that, we need to talk about Full House. Or more specifically, the star of Full House, a golden retriever named Buddy.

Buddy was a stray who was adopted and taught sports by his owner. He was so famous, he appeared on two shows starring Bob Saget, Full House and America's Funniest Home Videos. He even starred in a film adaptation of his life called Air Bud.

He died a few weeks after Air Bud's sequel, but his legacy has endured. In total, there were two theatrical Air Bud movies, along with three direct-to-video sequels.

Like most people, I haven't seen any of these movies, nor do I intend to.

Rather than putting the franchise to sleep, Disney shifted the focus to the next generation. While I suspect the real Buddy was neutered, the theatrical version was more prolific: his children had already appeared in the later Air Bud movies.

The movie Air Buddies elevated them to top billing and (for some inexplicable reason) gave them the power to speak. It must have been successful, to date there have been seven Air Buddies films released with an eighth planned for next year. It's the fourth in this series that interests us now, however, the 2009 film, Santa Buddies.

Santa Buddies opens at the North Pole, where Santa Claus (played by George Wendt) and Santa Paws solemnly travel to gaze on the sacred Christmas Icicle, a repository harnessing the Christmas magic needed to power the North Pole.

At this point, you may be realizing that I typed the words "Santa Paws" in the previous paragraph. It is imperative that we fully explore this concept, as it is essential for understanding the foundation of this movie. You see, the Christmas magic harnessed by the Christmas Icicle comes from the belief of the world's children and puppies. It of course naturally follows that the inhabitants of the north pole would be elves and dogs. Oh, and CG reindeer.

Santa Paws' son, Puppy Paws, isn't interested in inheriting his father's legacy, so he runs away to meet the Buddies.

This brings us to the established cast: Rosebud, Buddha, Budderball, Mudbud, and B-Dawg. Rosebud, the sole female character, is defined by stereotypically female interests and traits. Buddha is a dog named after a religious and spiritual figure: he talks like a hippie surfer. Budderball has an eating disorder, and B-Dawg is a wannabe gansta. In contrast, Mudbud's interest in rolling in dirt comes off as relatively innocuous.

Pretty soon we're introduced to Cruge, a mean dogcatcher who.... Who....

WAIT. WAIT A MINUTE. ARE YOU FUCKING KIDDING ME? THEY NAMED A DOG BUDDHA? NO ONE AT DISNEY THOUGHT THAT MIGHT COME OFF AS A LITTLE OFFENSIVE? NO ONE?

Sorry. Moving on. Cruge, whose name is pronounced like "Scrooge" with a silent "S", is played by Christopher Lloyd, who I hope was very well compensated for being in this thing. Wendt seemed to be bored or drunk in all his scenes, but Lloyd actually seemed to try to salvage something from his role. It was a futile effort, of course, but you've got to respect the man for trying.

At any rate, Puppy Paws hangs out with the Air Buddies and manages to get each of them into trouble or to destroy something they care about. This burns up about fifteen minutes, but doesn't have much bearing on the plot. Cruge captures Puppy Paws and brings him to the pound.

Meanwhile, at the North Pole, all the magic around Christmas is gone, because for some unexplained reason, if Puppy Paws doesn't believe in the holiday, it'll all go down the shitter. It doesn't really seem to matter what the rest of the world thinks: everything will be lost if this one dog doesn't learn a lesson and get back to the North Pole.

Fortunately, Puppy Paws learns the true meaning of giving a shit when a small dog sings a song about Christmas at the pound. He's broken out by the Air Buddies, along with an elf-dog who came looking for him. Meanwhile, a Christmas elf explains the importance of the position to a teenager who dresses up as an elf as a seasonal job.

But things aren't so easily solved. The magic Christmas mail truck that brought the elves (humanoid and canine alike) to Washington state isn't running. So the only way for Puppy Paws to get back is if he uses the magic crystal on his Christmas leash to give the Air Buddies the power of flight and they pull a sleigh they steal from the place the aforementioned elf works (the teenage one, not the other one).

So that's how Christmas is saved by a bunch of puppies representing the most disgusting stereotypes seen outside a Michael Bay movie in years.

Want some resolution? Tough shit: you're going to get it anyway. Santa's reindeer are sick, so the puppies'll need to travel around the world and distribute gifts with Puppy Paws - why the hell not? And Cruge should probably find a heart and give Tiny to that poor kid. Maybe they can even invite him over for dinner. And the Air Buddies' owners are all worried about them? I guess they should go home and demonstrate they're not dead. But first they need Santa hats in thanks for saving Christmas, because apparently Santa sucks at giving rewards.

At least they're not going to give the female character a pink hat, because if they did that it would be utterly... oh. Yup: check that off your list.

Let's move on to the effects. A surprisingly high percentage of this movie is dogs somehow being coached to sit or stand perfectly still while talking mouths are imposed over them. The effect is somewhat akin to wandering around the uncanny valley, slipping on some dog shit, then falling forty feet into the uncanny crevice, breaking your leg, and waiting for the wolves to close in and finish you off. In other words, it's a bit disconcerting.

But there's more computer effects than dogs' lower jaws. There's also the reindeer, which are entirely computer generated using state-of-the-art Playstation quality graphics. The North Pole, on the other hand, is closer to the N64.

In addition to digital effects, they also needed real dogs. Conveying how poorly they captured these dogs on film is almost impossible: they clearly used dogs of different ages and breeds for some characters, and there was no attention paid to continuity. You'd see Puppy Paws walking, the camera angle would shift, and there'd be an entirely different animal on camera.

In summation... this movie was awesome. I mean, it was also horrible, but it was unintentionally hilarious. I almost fell out of my chair laughing when I realized that Christmas in the movie's universe was built 50% for human children and 50% for puppies, and that Santa Paws was more or less equal in importance to Santa Claus.

This movie was so bad - so egregiously, unbelievably and hilariously bad - it was good. The real question is whether they'll be able to maintain that level of quality through the Santa Paws spin-off movies.

That's right: the Santa Buddies spin-off left something behind: a prequel focusing on the origin of Santa Paws himself. And that has a sequel. Because why the hell not?

And make no mistake, Mainlining Christmas will be reviewing them both.
00's Comedy Erin Snyder Fantasy Movie So Bad It's Good