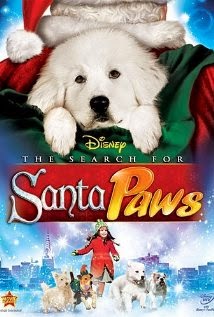 The Search for Santa Paws is, obviously, the spin-off prequel to the fourth spin-off sequel of the direct-to-video fifth installment of the Air Bud series. It has a sequel, but we're not there yet. This was directed by Robert Vince, who - according to Wikipedia - "specializes in directing movies that feature animals playing sports". His parents must be so proud he ignored their advice and followed his dreams.


This movie differs from its predecessor in several ways. First, while it still features talking animals, their role is much less central to the film. Unless you count humans as talking animals. There are a lot of talking humans in this movie. Also, singing.

I'm sorry. I'm getting ahead of myself. Let's start at the beginning, which takes place at the North Pole. The producers were unable to get George Wendt back to portray Santa, so they replaced him with Richard Riehle, who has a very different take than Wendt's. In the last movie, Wendt's Santa seemed like he was perpetually in danger of falling asleep. In contrast, Riehle is... well... let me put it like this: I've seen at least a half-dozen different takes on the "psycho-killer Santa" motif, and none of them are a tenth as terrifying as this Santa is in the opening scene. To be fair, the make-up artist deserves at least as much credit as the actor for this effect.

Anyway, Santa's revels are interrupted by the appearance of a gift and message. Mr. Hucklebuckle, a good friend of his, has passed away, presumably of complications related to his stupid-ass name. He's sent Santa Claus a stuffed dog for a present, because apparently Santa Claus doesn't have enough stuffed dogs at his massive warehouse full of toys. For some reason, the magic Christmas icicle transforms the stuffed dog into a real puppy, which Santa names, "Paws."

Paws and Santa visit New York for reasons I don't remember or give a shit about. When Paws runs into the street to retrieve something, Santa jumps in front of a cab which wouldn't have hit the dog anyway. Santa is struck, which causes him to lose his memory, and Paws is separated from him. Santa gets robbed, as well, losing a case containing a slice of pie. He also loses his magic crystal, which has more of a bearing on the plot. Eventually, he winds up wandering into Hucklebuckle's old toy store, which has been passed to his grandson, who has to keep the shop open for one Christmas in order to take legal possession of the property. He hires amnesiac-Santa to play his store's Santa.

Oh, Hucklebuckle's grandson's wife is around, too. She's happy to stay in New York for the holidays, but she's extremely depressed that they don't have any kids. Because apparently that's the only way a woman can live a fulfilling life.

Did I mention the obligatory orphans living nearby? There are two orphans we need to focus on: the others are just around to sing and dance, and I assume they all die of polio after the movie or something. The first important orphan is new to the hard-knock life. She's young, short, and shows up sad that her parents just bit it.

Lindsay can verify this next part for me. The second she was introduced - before she opened her mouth - I took one look at the character and surmised she was going to be this movie's Tiny, the small homeless dog in the last one of these we saw. Lindsay then looked up the actress and informed me she'd actually voiced Tiny in Santa Buddies.

The other orphan is a slightly older girl, who's given up on getting adopted. Long story short, they end up finding and taking in Paws, until the evil overseer of the orphanage catches them. She steals Paws's magic crystal, and he eventually turns back into a stuffed dog.

Eventually, Mrs. Claus sends the elf and elf-dog from the last movie to go sort all this shit out. When they arrive, Santa's in the hospital and the orphanage overseer has tossed Paws into the furnace. The short orphan rescues the stuffed dog and turns him back into a puppy, and they all go collect Santa from the hospital.

Only Santa's been away from his magic crystal for too long: not even its crappy magic is enough to revive him. Paws instructs the elf to give Santa his crystal, as well, despite knowing that he'll revert back to a stuffed dog, and for some contrived reason they probably won't be able to transform him a third time. Santa takes the plush toy to the Christmas icicle, which can't do the job. Santa Claus sheds a tear, which explodes with Christmas magic and transforms the dog back, albeit as an adult.

Jesus. Santa's been alive for 1600 years, and he never realized that his tears were goddamn magic? By this time, he should be bottling and weaponizing that stuff in case Martians invade again. Get in the game, Santa.

Regardless, Santa renames his dog Santa Paws, and they go deliver presents to New York. The orphanage is passed to someone who isn't evil, and the two orphans we're supposed to care about get adopted by the Hucklebuckles, who decide to keep running the barely-profitable toy store. Seriously: it's a plot point that the store makes a single penny over the holiday season, which is by far the best period of the year for retail. If those kids thought they had it bad at the orphanage, wait until they try living below the poverty line now that the Republicans control the Senate.

Like I said, this movie spends far less time with animal characters, though Diedrich Bader did take a break from Batman: The Brave and the Bold to voice Comet. There were also four talking dogs who kind of filled in for the Buddies, though they only had a few minutes of screen time. In that time, they did manage to be surprisingly offensive, mostly thanks to the poodle with long black fur being played as a stereotypical Jamaican Rastafarian.

Shockingly, the absence of the annoying animals actually made this movie a little less watchable than its predecessor. The difference between the movies is sort of reminiscent of car wrecks. Santa Buddies was like a car wreck with dead bodies, while this was like one without. Technically, the crash with dead bodies is far worse, but the one without is just boring.
2010 Comedy Erin Snyder Fantasy Movie Sucks