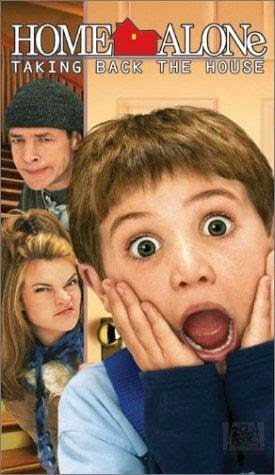 I'd like to begin with a thought experiment for those of you who haven't seen Home Alone 4. I'm assuming that includes you, since - as far as I can tell - no one alive has actually seen this movie and only a handful have even heard of it.

So then, imagine that, after the disappointing third installment (which, to be fair, isn't really much worse than the first two), the Home Alone franchise didn't disappear entirely. Imagine instead that the IP transitioned to a made-for-TV movie aired on ABC. Now imagine that the character of Kevin McCallister, the protagonist from the original two, returned, albeit recast, along with every other character. Now ask yourself, how bad would you expect this to be? How abysmally awful, how utterly vapid, how monumentally stupid do you think a movie like that would be?

What you're picturing right now is what we'll call, "The Expectation." Before we go on, you'll have to lower that expectation.

Before we get to the twist, before we reach the plot or even the premise of this installment, let's begin with this: in the original Home Alone, Kevin McCallister was supposed to be eight years old. Home Alone 2 took place two years later. We know this movie took place at least two years after that, because Kevin watches video from his previous Christmas which does not align with Home Alone 2: Lost in New York.

Now then. Let's talk about the premise. Kevin's parents have been separated for about a year, and his father is getting engaged to a comically wealthy heiress who lives in a gigantic mansion where every door and window is voice activated using portable remote microphones. Marv, the dumber of the two bandits from Home Alone 1 and 2, is now married to a character dumber than he is. They're preparing to kidnap a prince, who is coming to visit Kevin's dad's fiance on Christmas for no discernible reason.

Incidentally, your expectations are still not low enough.

Kevin goes to visit his father and his fiance for Christmas to escape his siblings. Incidentally, Kevin is never "home alone" at any point in this movie, mainly because there are a pair of servants, one of whom, we learn, is working with the kidnappers.

Oh, and it's obviously the one he doesn't suspect. But I'm getting ahead of myself.

Kevin runs into Marv almost immediately and does several hundred thousand dollars of damage to the house, which is fixed between scenes. Everyone blames Kevin, of course, assuming he's trying to sabotage his dad's new relationship. Throw in some relatively tame sadism compared to the horrors Kevin unleashed in Home Alone 1 and 2, and that's the movie in a nutshell.

If you're really concerned with spoilers for this, you should probably stop reading now. I'm not referring to this review: I mean, if you're the kind of person who'd want to see this movie after everything I just told you, you're clearly too stupid to gain anything from reading, and you might as well just stop bothering altogether.

Where was I? Oh yeah, the conclusion.

Kevin winds up locked in the cellar with the butler, who isn't the heartless monster he thought, but is actually a kind man. Meanwhile, the seemingly gentle maid is actually... wait for it... the mother of Marv. The moral from this is that we can't judge a book by it's cover. Unlike this DVD, which you can tell is a piece of crap by looking at its cover.

Fortunately, they have a cell phone. Which they use to try and call Kevin's mother several times, despite the fact she isn't the police, nor is she all that close. After the phone runs out of batteries without them having managed to explain to anyone what's going on, they use the dumbwaiter to escape. Kevin hurts people some more, then everyone arrives, realizes they should have listened to him, and so on and so forth.

Are we done? Not yet - not quite yet. We haven't resolved Kevin's parents' relationship issues yet. "What relationship?" you might ask, confused. "People get divorced and move on: it's sad sometimes, but it happens," you might point out. "For a TV movie to turn around and have someone ditch their fiance - on Christmas, no less - to move back in with their ex, particularly on the same day the fiance's house was invaded by kidnappers, would be downright psychotic, not to mention the fact it would be utterly unconscionable to give millions of children across the world whose parents have gotten divorced false hope they could reconcile their differences at a moments' notice," it's possible you'd add.