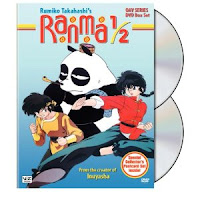 Whee!  I made Erin watch this, even though I knew he wouldn't get it.  And if you haven't seen the rest of Ranma 1/2, you won't get it either.

I am fascinated by Japan's adoption of bits of Christmas.  It's not a national holiday there, very little of the population is Christian, they have just decided that it's an excellent excuse for a party.  Even just from what I can tell by watching a few anime holiday episodes, Christmas is seen as a time to have fun, give small cute gifts, and go out with your romantic partner.  I approve.

Ranma 1/2 is one of the few anime that I have made the time to see all of, because it amuses me to no end.  This episode is one of the OVA series, which is to say it was a video release, not part of the initial TV run.

The plot is fairly straightforward: Kasumi has a dream that Santa wants her to throw a Christmas party, so she does. Nearly every significant character in the 161 episode series has at least a cameo, so good luck keeping up. Of course, putting all the main characters in a house together makes for much silliness and plotting.

I hadn't watched any Ranma in a while, so it was a bit of a nice refresher, although I know there were references I missed. Overall it is a sweet episode, with some romance, a lot of decent humor, and a few very funny moments.

Plus there's singing, and magic snow, because it's silly and adorable.  I don't recommend this to non-fans, but I was very happy to rediscover it.

If you look online for this episode, don't forget to make sure you get it subtitled.  The standard dub on this show makes me shudder.