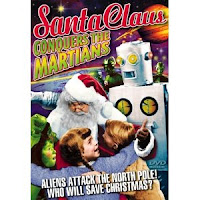 This was a very confused movie. I'm not saying that just because I got a little tipsy before watching it, but you may want to keep that fact in mind.

The first five minutes are insipid crap, and then the action moves to Mars and I started to... enjoy the movie! The premise is, the kids of Mars are addicted to Earth TV, and they are depressed and not eating. The leader of the Martians calls up his deputies and seeks the advice of the Ancient One. The Ancient One tells him the kids are sick because with the Martian advanced learning technology, the kids learn how to be adults too fast, and never learn to have fun. He recommends seeking the specialist in childhood joy: Santa Claus.  And so the Martians set off to capture Santa.

Now, for all the inherent silliness, most (not all) of the actors playing Martians are acting just as serious about their roles as most any cast member of Star Trek, Forbidden Planet, etc. There is a serious problem on their planet, this will fix it, so they're going to do their jobs and save the kids. There's a significant sub-plot with one of the trusted lieutenant types who fears that Mars will lose its way if they import Earth-style frivolity. The conflict is simple, but as well done as nearly any sci-fi flick I've seen from this era. The leader's care for his children and his planet is very genuine and sweet.

This whole first half I actually quite liked, except when any Earth characters were on screen. The Martians were in a sci-fi movie, the Earthlings in a corny comedy. The contrast was odd.

After the Martians get Santa (and two handy earth kids) back to Mars and he starts in on making Martian kids laugh (creepy, incidentally), the movie turns campy all over. The evil lieutenant gets a pair of flunkies and they lose all their competence, devolving into slapstick.

The sweetness of the main Martian couple is maintained, but the end of the movie is pretty lame.

If you are a fan of 60's sci-fi, you could do worse than this for a zany Christmas treat.  I mean, not a lot worse. There's some pretty god-awful stuff: poor effects, bad writing, hammy actors. I felt for the Martian leader, though, trying to act his way into a better movie by sheer force of will.