Powerpuff Girls: The Fight Before Christmas (2003) 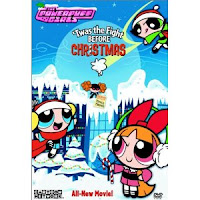 Given the vast number of Christmas specials I'm sitting through, I can't think of higher praise than what I'm about to say: this hour-long special felt short.

While there's certainly some bad Powerpuff Girls cartoons out there (seasons 5 and 6, I'm looking at you), the majority is very, very good.  And this represents some of the best.

Even before the action picks up, just watching the Powerpuffs decorate is immensely enjoyable.  So much of what made the show a success was the contrast between childhood and super powers, and that's certainly on display.

The story involves Princess, who breaks into Santa's workshop to alter the naughty/nice lists.  It's well put together and fast paced, leading up to a world-spanning battle.

The end could have delivered more punch: the resolution felt a tad too easy (and nowhere near violent enough) for my tastes.  I also wasn't in love with the version of Santa used here.  Something about his design just didn't appeal to me.  But that's nitpicking.  This is a fantastic Christmas special.

They did release this on its own, but it's a ripoff at sixteen bucks

.  However, this is also included as an extra in the complete series box set

, which is itself worth picking up if you can find a copy.  Regardless, this special is highly recommended.
00's Comedy Erin Snyder Highly Recommended Special Superhero