Goof Troop: Have Yourself a Goofy Little Christmas (1993) 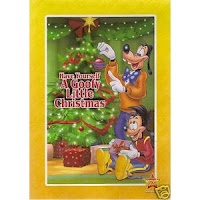 It's been a very long time since I've seen any Goof Troop, one of my least favorite series that was part of the Disney Afternoon lineup.  The holiday episode is cute, but odd, and exemplifies what I remember about the series.

That means it has the strengths of the series: family stories, told with heart, with the occasional very funny line.  That also means it has the weaknesses that plagued the series: unrelenting ill luck that isn't actually funny, and an awkward mesh between the character based humor and the over-the-top slapstick.

There is also a certain level of unexplained zaniness and a few really confusing cuts that made me wonder if the episode was cut down from a slightly longer special.  The ending, for example, seems to come out of nowhere and makes no sense.  I couldn't find any information about it, though.  It could easily just be poor writing.

Have Yourself a Goofy Little Christmas gets an A for effort and a C- for execution. Skip it, unless you have super-fond memories of the show.