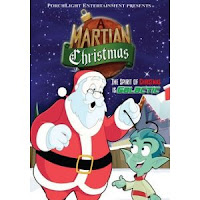 Not to be confused with the classic "Santa Claus Conquers the Martians," this is an hour-long Christmas special about a ridiculously small group of Martians coming to Earth to blow it up.

I'm assuming this was intended to be shown on television, though I'm having a hard time finding evidence it actually ever aired. There's no Wikipedia page up for the special, and the page for PorchLight Entertainment, the company which made it, reads like it was written by someone working for the company. Or their mother.

All things considered, this really isn't a bad special. There are some solid jokes surrounding the Martians' misconceptions of Earth based on television broadcasts, as well as the similarities between the little green men from Mars and Christmas elves. Plus, they're ostensibly here to blow up the Earth, which always makes for good comedy.

The thing is, while this isn't bad, it isn't exactly good, either. The animation is pretty low end, about on par with flash videos you find on the internet. The special is cute and inoffensive, but it's not worth investing an hour of your time, unless you're too young to be reading this blog.