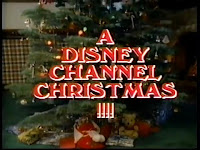 Man, I loved this when I was a kid. We had the Disney Channel when I was little, back when it was the channel that showed wall-to-wall old Disney Cartoons and "tween" programming wasn't yet a glimmer in a marketing director's eye.

I watched all the Disney Channel Holiday Specials.  There was one for Christmas, and one for Halloween hosted by the Magic Mirror from Snow White, and one for Valentine's Day, and maybe some that I'm forgetting.  They are essentially themed clip shows, but sometimes it would be the only time you would see some of these bits.

There were three main types of content spliced together to make this special, so I'm going to talk about each in turn:

This is the least interesting part for me now, and I don't remember it much from watching as a kid, so maybe it bored me then too.  A few of the pieces fit the theme well, especially the skating scene from Bambi and the Waltz of the Flowers from Fantasia.  I do like those.  The sections from Peter Pan and Cinderella and Snow White are all pretty, cute scenes, but not especially compelling out of context.  And Pinocchio I just don't like.

Now I want to watch Fantasia, though.

This is a mixed bag, but overall quite a nice selection.  The pieces chosen stretch across the years that Disney has been making shorts, and so there's a 50's piece with Pluto, Chip and Dale, an older short (Donald's Snow Fight), some Silly Symphony shorts from the 1930's, a black and white Mickey short from 1932, and more.

My favorite pieces were:

"Once Upon a Wintertime", because I'm a sucker for all of those 50's stand-alone shorts, especially the Merry Melody/Make Mine Music ones (like Johnny Fedora, Suzy the Little Blue Coupe, Bumble Boogie, etc.....) I just think they have a nice style.
Of course, this one is more appropriate to Valentine's Day, but I'm not complaining.

"The Clock Watcher", which is a 1945 short about Donald Duck having a job in a gift wrapping department.  It's a fun classic cartoon, one I've seen over and over, and it actually still makes me laugh.

This includes the first two songs and the last one, mostly, and all the introductions.  I like "From All of Us to All of You", originally recorded for the first Disney TV specials in the 50's.  The song that was added after it for this 1983 special is absolute dreck.  Oddly, the special closes with "When You Wish Upon a Star", with the recording from the movie (quite lovely), and 'new' animation.  I put new in quotation marks there because it looks like some animation intern went back into the archives and created a mashup with existing animation. Bits are from Snow White, bits from Alice in Wonderland, bits from Cinderella, and the characters haven't been reanimated, just existing cells placed over a blank colored backdrop. It looks extremely surreal.

While this was a nice way to see these pieces together on cable, now with the internet I can just look up the specific short I want to see.  I'm nostalgic for this special, but I don't know that it'll become part of my traditions again.  Some of the shorts might, though.

You can probably find the whole special if you look...
80's Lindsay Special